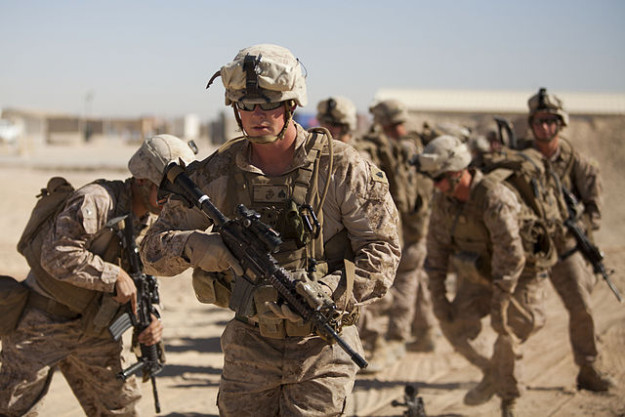 There is considerable debate as to whether the U.S. Marines will be called on more or less due to global climate change (Wikimedia Commons photo).

Global conflict experts say the Obama administration’s recent focus on climate change as a national security threat may be misguided.

“The link between global warming and national security needs is tenuous at best, though the Arctic might be an exception, if [Russian President Vladimir] Putin continues his revanchist ways,” Harvard psychology professor and best-selling author Steven Pinker said in a recent e-mail interview. “Most wars have nothing to do with climate, and vice versa.”

The Obama administration’s 2015 National Security Strategy emphasizes climate change as a long-term national security threat that must be balanced with more immediate concerns such as terrorism. In an interview last month with Vox, Obama added that media tend to overstate terrorism as a threat compared to climate change.

Joshua Goldstein, professor emeritus at American University and a political science research scholar at the University of Massachusetts, Amherst, said in an e-mail interview said there’s a dubious connection between global climate change and armed conflict.

’Climate change is a terrible crisis that needs all our attention, but it’s not really war that will be the problem we’ll have to deal with,” Goldstein wrote in an e-mail. “As for the U.S. government, it’s always going to be on the lookout for threats that justify ongoing high military budgets, even when violence is declining historically — though of course increasing modestly in the past five years [due to Syria].

“I think the officials genuinely think this is a threat they must prepare for, but I also suspect that if it wasn’t this, it would be something else.”

A study released last week linked the ongoing war in Syria to a drought precipitated by climate change, but Goldstein says most extreme weather events and natural disasters – which are not all linked to climate effects — do not result in armed conflicts.

“There is some evidence that drought was a factor in Syria and some other scattered cases,” Goldstein said. “But the 2004 tsunami actually seems to have helped end the war in Aceh [Indonesia] and didn’t create a new war.

“The typhoon in the Philippines a year ago didn’t cause the war there to restart,” Goldstein added. “The terrible flooding in Eastern Europe a couple of years ago doesn’t seem to be connected to the Ukraine violence. In Somalia a few years ago there was a terrible drought and start of a famine, but it didn’t make the war worse — if anything, the opposite.”

Pinker, whose 2012 bestselling book Better Angels of Our Nature concludes armed conflict around the globe is on the decline, has consistently rejected climate change and any resulting scarcity of natural resources as likely causes of major wars in the future.

“Physical resources can be divided or traded, so compromises are always available; not so for psychological motives such as glory, fear, revenge, or ideology,” Pinker wrote in 2013. “There are many reasons to worry about climate change, but major war is probably not among them.”

Pinker, however, points to several studies by the Peace Research Institute Oslo (PRIO) that undermine the theory that climate change will lead to more armed conflicts.

“While population growth and density are associated with increased risks, the effects of land degradation and water scarcity are weak, negligible or insignificant,” one such PRIO report concludes. “The results indicate that the effects of political and economic factors far outweigh those between local level demographic/environmental factors and conflict.”

Nevertheless, a rising chorus of both active-duty and retired U.S. generals and admirals have sounded the global climate change alarm as it relates to military readiness.

In a report last year (pdf) entitled National Security and the Accelerating Risks of Climate Change, 11 retired generals and admirals found that, “Fresh water, food, and energy are inextricably linked, and the choices made over how these finite resources will be produced, distributed, and used will have increasing security implications.”

The former military experts also discussed the “melting of ‘old ice’ in the Arctic,” and wrote that the “United States and the international community are not prepared for the pace of change in the Arctic.”

On the subject of major war over dwindling resources, Goldstein echoed Pinker at an event both attended in Denver last fall, hosted by the Colorado-based One Earth Future Foundation.

“Fighting over resources is not necessarily the big driver of conflict in the 21st century,” Goldstein said, pointing to the example of the Caspian Sea soon after the breakup of the Soviet Union in early 1990s. “Suddenly, a bunch of countries were there bordering it, and they discovered a huge amount of oil under there.

“You think everyone will be out there with their warships fighting each other over the oil, but they didn’t,” Goldstein said. “You can’t pump oil when you’re fighting a war, so they yelled at each other for a couple of years and then they started drawing these lines on maps and pumping out the oil. It can be an impetus to conflict. It can also be an impetus for cooperation.”

The author of Winning the War on War: The Decline of Armed Conflict Worldwide and the bestselling text book in its field, International Relations, Goldstein does acknowledge the significance of climate change – just not as a primary reason for increased conflict.

“I think climate change is the big issue,” Goldstein said. “I may literally now stop studying war and try to go into climate change, because I just think it’s the big moral and practical issue of our generation — or my kids’ generation really. But not because it’s going to kill a lot of people in conflicts. People will starve, people will drown, but less so in conflict.”