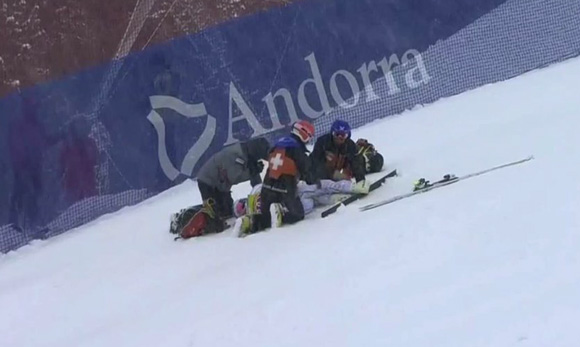 Lindsey Vonn had to be carried off the mountain after crashing in Saturday’s World Cup super G. On Wednesday she announced she’s done racing for the season (NBC Sports).

Vail’s Lindsey Vonn announced on Instagram Wednesday that she is done ski racing for the season, calling it quits after a knee injury last weekend that had fans of her chief rival for the overall World Cup title accusing her of faking the injury.

Vonn crashed near the bottom of a World Cup super-G course in Soldeu-El Tarter, Andora on Saturday, and was taken off the mountain in a sled after a long delay.  Switzerland’s Lara Gut, right behind Vonn in the overall World Cup chase, was held up at the top of the mountain as snow continued to fall, but eventually raced and finished 16th, cutting Vonn’s lead to just eight points.

On Sunday, Vonn wore braces on both knees and bounced back in the combined event (one run of super-G and one run of slalom) to finish 13th and increase her lead to 28 points over Gut, who straddled a gate in the slalom and failed to finish.

Gut fans trolled Vonn on her Facebook account, accusing her of overstating or even faking the knee injury to freeze Gut at the top of the hill while course conditions worsened. Afterward, Vonn revealed that an MRI showed a hairline fracture in her left knee.

On Wednesday, Vonn said on Instagram that the injury was even more severe than that original prognosis and not nearly stable enough to continue racing on as she sought to finish out the season and claim her American record fifth overall title. She already holds the record with four (no other American has won more than three since Phil Mahre did it in the 1980s). Gut now is virtually assured the overall title.

Today I am making the difficult decision to end my season and leave the World Cup circuit due to an injury I suffered last Saturday. Because I am currently leading the Overall World Cup standings, this is one of the toughest decisions of my career. When I crashed on Saturday in Andorra, I fractured my tibial plateau. The traditional X-rays that were taken that afternoon showed a hairline fracture, but the tibial plateau appeared to be stable and did not pose significant risk to competing. So I raced on Sunday. After the Super Combined on Sunday, I went to Barcelona where more precise MRI and CT equipment was available and scans were performed on Tuesday morning. Those images showed that there was not just 1 hairline fracture, but in fact 3. And the fractures are not hairline, but instead they are significant enough that they are not sufficiently stable to permit me to safely continue skiing. Further damage any of the fragments could result in a serious surgery that would risk my future in ski racing. With the World Championships in St. Moritz next year and the Winter Olympics in South Korea the following year, I cannot take that risk. So I have made the decision to end my season. I am very proud of what I have been able to accomplish this year: 9 World Cup victories, breaking the World Cup downhill win record, breaking the World Cup Super G podium record, and winning the most World Cup discipline titles–20–of any skier, male or female. While I am confident that I’m making the right decision, it still doesn’t make this decision any easier. Thanks to everyone who supported me and stood by me through it all. Best of luck to all the World Cup competitors. I’ll see you again next year. Xo LV