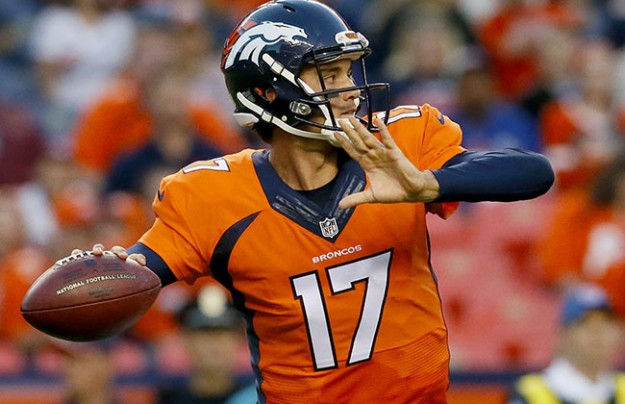 So long to the Brockweiler; hello to ” The Butt Fumble.” While Brock Osweiler helped the Denver Broncos get home-field advantage in the playoffs by subbing for the retired Peyton Manning last season and going 5-2 (including critical wins over Cincinnati and New England), let’s not pretend he was the second coming of Manning, or his former boss, John Elway. Let’s also not pretend “Butt Fumbler” Mark Sanchez is the long-term answer.

Osweiler totally deserved to cash in and move on to the Houston Texans, especially after being benched in favor of Manning against San Diego and then watching the future Hall of Famer gobble up all the glory in the playoffs and Super Bowl. But Osweiler didn’t earn his ring as a starter in the big game, and his best chance of doing that was likely with the Denver Broncos and not the perennial sad-sack Houston Texans.

The Denver Broncos are 3-5 in Super Bowls, meaning they get there a lot and they win it once in a while. Houston? Not so much. The have a problem winning. Denver offered Manning’s four-year understudy with a very short resume a whopping $16 million a season, but he jumped for an extra $2 million per, one more year on the contract and most importantly $37 million guaranteed versus “only” $30 million from the Broncos.

It’s easy for fans to say, “Stay in Denver and take advantage of that dominant defense that basically won the Super Bowl despite Manning and the inept offense,” but $7 million is a big difference. To me, $7,000 is a big difference. However, I don’t blame Elway for not blinking and letting Osweiler walk. Chances are better Osweiler will flame out in Houston before he becomes another Elway or Manning, and he clearly didn’t want to be in Denver.

And last weekend’s late-night drunken pizza shoving incident involving Osweiler in Arizona couldn’t have helped his cause. That’s a major judgment red flag when a QB is looking to cash in on free agency and he’s out that late in public and clearly well-oiled. He ultimately did the right thing by walking away despite being shoved hard in the back, but he shouldn’t have been in that place at that time in the first place, and he pushed a woman during the incident.

Not comparing the two, but late-night public partying and allegedly abusing a woman are two big reasons Johnny Manziel just got released by the even sadder-sack Cleveland Browns, where San Francisco 49ers QB Colin Kaepernick reportedly wants to go instead of the Denver Broncos. Having heard that clear lack of judgment, I am no longer too excited about the possibility of Kap coming to town but some are saying that’s the only reason the Broncos picked up Sanchez, to trade to new 49ers coach Chip Kelly.

While Kaepernick is an explosive player who guided the Niners to the Super Bowl just a few years ago, he’s lately shown a lack of locker-room leadership and now displays a desire to hide from the spotlight in the NFL black hole of Cleveland — a city Elway forever relegated to “Mistake by the Lake” status via the “The Drive” and “The Fumble” in the 80s. If Kap wants to go there, we don’t want him in Denver.

Trevor Siemian was the only Denver Broncos quarterback under contract after Manning retired and Brockweiler bolted, and he showed me a lot in the preseason last year. I like Elway’s ability to pick talent and then develop it, so I think he knows what he’s doing in the draft and free agency, and I don’t think any true Denver Broncos fan should be pushing the panic button with Elway in charge.

Also let’s not get too worked about the Broncos acquiring Sanchez, who has that back-to-back AFC Championship Game experience from early in his career on his resume but is also is the owner of “The Butt Fumble.” This is a guy who inspired so little confidence in New York that they actually picked up Tim Tebow, who was replaced by Manning in Denver and now is a TV commentator.

I think Elway still has some free-agency moves up his sleeve at the QB position and may be eyeing some draft prospects as well. After all, he’s a GM who won it all with a patchwork line and Manning at his career worst last season. As I wrote back in January, if the Broncos won the Super Bowl, Elway deserved his second MVP for revamping the entire team and winning one with defense.

Von Miller absolutely deserved the actual SB MVP, but let’s not forget who drafted him No. 2 overall.

The fact that Elway wasn’t named the executive of the year last season, and has yet to win the award since salvaging the team after the McDaniels nightmare, is an absolute joke. I think he now knows what he’s doing with the remake of his defending Super Bowl champion squad, and I for one will watch in wonder as he once again works his magic.