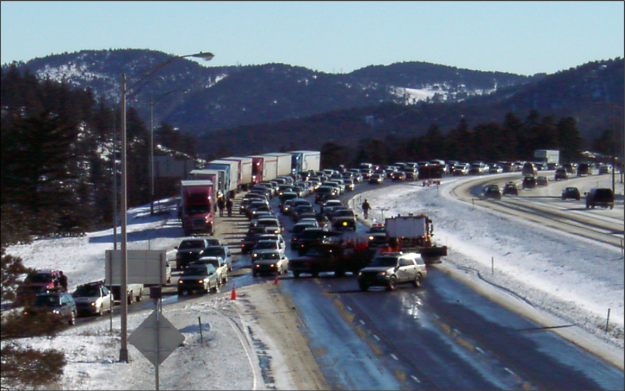 Interstate 70 into the mountains is frequently a traffic nightmare on weekends during the winter (I-70 Coalition photo).

Former Colorado Gov. Dick Lamm, who spearheaded the rejection of the 1976 Denver Winter Olympics, says he’s not opposed to a future Colorado bid but advocates a rethinking of the games after the “wildly out of control” costs and environmental impacts of the $51 billion Sochi “extravaganza.”

“Now that we’ve got the most expensive Olympics in history, I just think there’s a lot of need in the world, and I can’t believe that you can’t have a cost-effective Olympics,” said Lamm, a three-term Democratic governor who now teaches public policy at the University of Denver.

Gov. John Hickenlooper and Denver Mayor Michael Hancock formed an exploratory committee in 2011 to pursue a 2022 bid, but the United States Olympic Committee (USOC) in 2012 decided to pass on 2022 and either go after the 2024 Summer or 2026 Winter Olympics.

Exploratory committee members say Denver remains interested in the 2026 Winter Olympics in Colorado, but major cost and infrastructure questions still need to be answered, and if the USOC puts all of its eggs in a 2024 Summer Games basket –submitting a bid for a major metropolitan market such as New York or Philadelphia — that would likely mean Denver would have to wait till 2030 for a winter bid. Committee members say Denver is not considering a summer bid.

“Colorado clearly is a viable [Winter Olympics] candidate with the mountains, the infrastructure, the organization,” said Bill Marolt, president and CEO of the United States Ski and Snowboard Association and a USOC board member. “The USOC is looking at when is the most opportune time to make that bid, and we’ll just have to see what decision they make.”

On Feb. 6, at a pre-Sochi press conference, USOC CEO Scott Blackmun said the IOC had encouraged the USOC to submit either a 2024 summer bid or a 2026 winter bid.

“We have a proud tradition on the summer side, and we’ve hosted the winter more recently than summer, so that’s going to be our initial focus,” Blackmun told reporters. “I certainly hope it’d [cost] less than $51 billion, because the federal government doesn’t get involved beyond security. It’s a big, heavy burden on cities and states.”

A USOC decision on a 2024 Summer Olympics bid is due by the end of this year, with an IOC selection expected in 2017.

“We should only [submit a future Olympic bid] in the context of can it help us tackle some of our most intractable problems that would be connected to the bid, and first and foremost that would be transportation and access,” said Conservation Colorado Executive Pete Maysmith, who served on a subcommittee of the 2022 Denver Exploratory Committee.

Lamm, as a state representative in 1972, formed a group to oppose the Denver Olympics awarded by the IOC in 1970, citing concerns about massive public debt, runaway growth and environmental impacts. Colorado voters rejected taxpayer funding and Denver became the only city in Olympic history to give the games back.

“We have a bottleneck in Interstate 70 going up to the mountains; it can’t be expanded,” said Lamm, noting the 1976 Olympics would have been held in Denver, Steamboat Springs and  Beaver Creek, which hadn’t been built yet.

“Just simply the Balkanized nature of the Olympics promised all kinds of logistical problems, but we are a much more sophisticated state at this time,” Lamm said. “It’s an expense problem – awesomely expensive — but I think we can engineer our way around that bottleneck.”

A Colorado Department of Transportation (CDOT) study released Feb. 19 put the cost of high-speed transit between Denver International Airport and the Eagle County Regional Airport at $16.5 billion and Pueblo to Fort Collins at $13.6 billion.

“It is clear that we currently lack the financial capacity to build either of these projects,” said CDOT Division of Transit and Rail director Mark Imhoff.  “However, the studies show that a statewide system could provide many benefits to the businesses, individuals and tourists that depend on our interstates …”

Russia reportedly spent $8.7 billion – more than the total $6.4 billion spent on the entire 2010 Vancouver Winter Olympics – just for the 31-mile Adler-to-Krasnaya Polyana rail line linking the Black Sea to the mountain venues for the Sochi Games.

Asked about the criteria for a 2026 Colorado winter bid and the degree to which environmental impacts and transportation will be considered, IOC media relations manager Sandrine Tonge said, “The bidding process for the 2026 games has not started yet, so it would be premature for the IOC to comment on it.”