Vail’s Lindsey Vonn completed her long and winding comeback from a 2013 knee injury Friday with a solid eighth-place finish in a World Cup downhill at Lake Louise, Alberta, Canada. 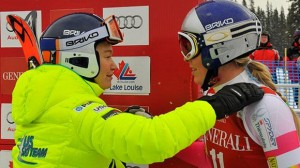 “I think I skied really well on the technical parts,” said Vonn, who hasn’t raced on the World Cup circuit in nearly a year. “I definitely could clean up some turns for tomorrow [Saturday’s second downhill], but I think it was a really solid start. I’m happy with it. I felt good out there.

“There was some soft snow on the track because it was snowing today, but I think in general everything held up pretty well and I’m just hoping to push it a little bit more tomorrow.”

Vonn is a 14-time winner at Lake Louise and remains stuck on an American record 59 career World Cup wins, four shy of the all-time women’s record.

On the men’s side, Utah’s Steven Nyman was a little over a half a second off the pace of Norway’s Kjetil Jansrud Friday on the Birds of Prey downhill course at Beaver Creek. Nyman finished third, just two-hundredths of a second behind second-place finisher Beat Feuz of Switzerland.

“You have to be a well-rounded skier here. There’s gliding, jumps, technical steeps. You have to do everything to get on the podium. Jansrud nailed it today. I was talking to him and he said, ‘I don’t think I’ve had a more perfect run.’ That’s pretty cool to hear from him.”

Jansrud has now won three consecutive speed events to start the season, including a downhill and super-G last weekend at Lake Louise. He’ll try to make it four straight in the super-G at Beaver Creek on Saturday – a race that starts at 11 a.m. and is free and open to the public.

Californian Travis Ganong made it a very strong day for the Americans with a fifth-place finish. Two-time Olympic gold medalist Ted Ligety, not typically a speed-event standout, finished in the points in 28th.