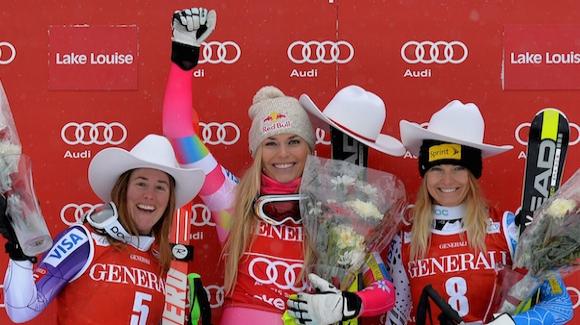 The sweep represented the best results for all three American standouts in two years and the win was the American record 60th of Vonn’s storied career. Having now fully recovered from a devastating 2013 knee injury, Vonn is now just two wins away from tying retired Austrian legend Annemarie Moser-Proell’s all-time career victory mark of 62.

Early-running Cook took the lead and held it until Vonn bumped her into second, and then Mancuso came down and rounded out the podium in third.

“Every day has gotten better here,” Vonn said after finishing 8th in a downhill on Friday. “Today, I went a little bit more aggressive than I did yesterday and took some more chances. I’m finally feeling confident again going fast. I’m pushing the limits and I want more speed. I haven’t had that yet until today.”

Fully 25 percent of Vonn’s wins have come at Lake Louise.

“There’s been some changing terrain here over the last couple days,” Vonn said. “Every day is a little bit different. I tried to pay a little more attention to that because obviously you couldn’t see it today. The light was really bad, but I know this course really well. It was a matter of looking at the snow conditions and the terrain.”

Vonn looked fast and strong, keeping her speed up throughout the run and never losing the lead. When she crossed through the finish and looked up at the time, she let out a scream of excitement, thrilled to be back in action.

It was the first ever all-American podium in alpine World Cup ski racing. It also marked four Americans in the top ten, with Laurenne Ross (Bend, OR) in sixth. Ross finished 4th in Friday’s downhill.

“I always thought this was something possible with our team,” Cook said. “I really wanted to be a part of it when it happened. It’s a good day to step up. I’m so excited for Lindsey too. It’s a cool day.”

The rest of the Americans had to deal with a dark, snowy course, but had good results. Also coming back from multiple knee surgeries, Alice McKennis (Glenwood Springs, CO) took 18th. Jackie Wiles (Aurora, OR) 37th and Katie Ryan (Aspen, CO) 46th.

“Sometimes I get intimidated by the thought of racing the whole world,” Cook added. “So today, I tried to keep it within our team. We race against our team in training and I tried to keep that same feeling. Today, I just went out there and I knew that there is so much talent in this group, so I felt like I was just racing against them. It took a lot of pressure away from me, so I just let it flow.”

Cook was the only American woman on the podium who hasn’t won an Olympic medal. Vonn and Mancuso own a combined six Olympic medals between them, including two golds.

“The new team dynamic has made us take a step back and not make training so serious,” Mancuso said. “It’s serious because we need to be out there and working on something, but it’s not serious because it’s not a race. We save all that energy and all those good things we learn while training for race day.”

The women will look to make more history in Sunday’s super-G race at Lake Louise, starting at 11 a.m. MST, with Universal Sports airing it live.

On the men’s side, Austria’s Hannes Reichelt edged Kjetil Jansrud in the Birds of Prey World Cup super-G at Beaver Creek, ending the Norwegian’s amazing string of three straight wins in speed events to open the season (Jansrud won the Birds of Prey downhill on Friday). It was the third time in eight career World Cup wins that Reichelt has tasted victory at Beaver Creek.

The Americans turned in a solid day, with two-time Olympic medalist Andrew Weibrecht in 10th and two-time Olympic gold medalist Ted Ligety in 11th. The Birds of Prey World Cup closes out with the men’s giant slalom on Sunday — a race Ligety has won four times in his career. The race is free and open to the public.