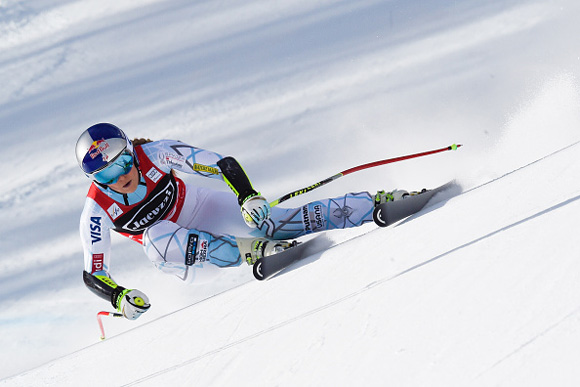 Vail’s Lindsey Vonn claimed her 8th win of the World Cup season on Sunday, winning a super-G in Cortina, Italy, and retaking the overall lead 900 points to 855 over fifth-place finisher Lara Gut of Switzerland.

The win was the diamond anniversary 75th of Vonn’s career, leaving her just 11 behind the all-time ski-racing mark of 86 held by Sweden’s Ingemar Stenmark. If she continues her torrid pace, Vonn may match her career best win total for a single season (12 wins in 2012).

Most importantly, the Vail resident is picking the Denver Broncos in Sunday’s AFC championship match-up with the New England Patriots:

“Big game, Patriots, Broncos, it’s going to be pretty exciting,” said Vonn, who said she’s staying up late to cheer on her home-state Broncos. “It’s kind of tough for me because I like Tom (Brady), because he is an Under Armour athlete, but I got to stick with my Broncos tonight.”

That sentiment echoed Eagle-Vail’s Mikaela Shiffrin in an interview for ESPN.com:

“I’m a Broncos fan,” Shiffrin said while home in Colorado (she’s currently rehabbing from a knee injury earlier this season). “Well, I’m an everybody fan. I’m a fan of anybody who plays their sport really well. I mean, Tom Brady is an excellent quarterback, an excellent athlete, and I think all football players are some of the best athletes of any sport.”

Vonn took victory No. 75 in commanding fashion by 0.69 over Tina Weirather of Liechtenstein. Germany’s Viktoria Rebensburg was third. Lara Gut of Switzerland held the overall World Cup lead by 10 points over Vonn coming into Sunday’s super G, but finished fifth Sunday and surrendered the lead to Vonn by 45 points in what has become a back and forth battle for the overall.

“This weekend has been incredible,” said Vonn, who also won Saturday’s downhill. “I feel like all the speed weekends have been amazing. I’m just skiing really well, skiing confident.”

“Super G is definitely a tougher event for me: I have no consistency in it at all, so I’m happy when I can throw down a run that is in there with some of the best,” said Cook, who scored a career-best World Cup result Sunday. “I’m really psyched about the time, more psyched about how fun it was, because the snow was about as perfect as you could ever ask for.”

Vonn won for the 11th time at Cortina, sweeping both the downhill and super G at the Italian resort for the third time in her career.

“This place is incredibly special for me,” Vonn said. “I’ve broken quite a few records here. I’m always confident and happy here when I’m in the starting gate, and I think that shows with my skiing. I wish we had more races here.”

Swiss ski team coach Roland Platzer set a tight, technical course for the women on Sunday; one that many felt didn’t favor Vonn’s skiing style. But she proved them wrong.

“It was interesting to see the course set today,” Vonn said. “It was a set a little bit more technical, and people thought that maybe I wouldn’t be able to win with that set, but I skied well. I’m a good turner!”

Up next, the women head to Maribor, Slovenia for giant slalom and slalom events Jan. 30-31. Then off to Garmisch, Germany for downhill and super G races Feb. 6-7.