Vail’s Heidi Kloser tore ligaments in her right knee and fractured her femur during a training run for the first qualifying round of the women’s moguls event at the 2014 Sochi Winter Olympics Thursday, crashing on the top jump and requiring transport to a nearby clinic. 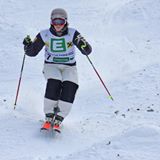 Heidi Kloser of Vail was injured in Olympic qualifying on Thursday (Facebook photo).

“Team USA freestyle moguls skier Heidi Kloser (Vail, CO) is being treated for a right knee injury after crashing on the top jump during moguls qualifications training Thursday at the Rosa Khutor Extreme Park,” the United States Ski and Snowboard Association said in a press release today. “She was transported from the hill to the nearby poly clinic in the athlete village for evaluation.”

Kloser, a Ski and Snowboard Club Vail athlete, had a strong month of December — including a World Cup podium — to qualify for her first Winter Olympics. But now she’s out of the Games with a fully torn ACL, partially torn MCL and an impact fracture of her femur. She was treated by Dr. William Sterett of Vail, among others.

She was, however, able to join the U.S. Olympic Team for the opening ceremonies.

“To see Heidi walk up the ramp in the middle of the arena following the American flag and keeping pace with everyone else was so incredible,” Heidi’s mother Emily wrote on Facebook.