Rod and Beth Slifer will be honored with a ski run called “Slifer Express” this coming ski season, according to Vail Resorts, which issued this short press release on Tuesday:

Vail Mountain recognized long-time Vail local, Rod Slifer, for his commitment to the community for more than 50 years. Expresso, a blue run, has been renamed to Slifer Express in honor of Slifer. Slifer Express is located on the front side of Vail Mountain and can be accessed from the Mountaintop Express Lift (#4). 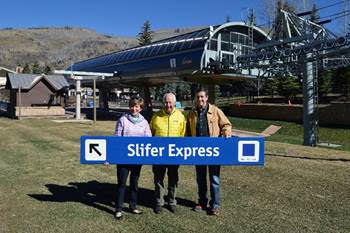 Rod and Beth Slifer will be honored this season with the renaming of Vail’s Expresso Run as “Slifer Express”. Shown here with Vail COO Chris Jarnot. Vail Resorts photo

Slifer’s introduction to Vail Mountain came after being hired by then, Vail Associates, in the spring of 1962. Slifer served as the assistant ski school director during his first winter in Vail. He went on to work in real estate, initially for Vail Associates and eventually starting his own firm, Slifer Smith and Frampton Real Estate. Slifer, alongside Pete Seibert, Earl Eaton and Morrie Shepard, named many of the runs on Vail Mountain during the resort’s inception.

“Rod has been one of Vail’s greatest ambassadors,” said Chris Jarnot, Executive Vice President and COO at Vail Mountain. “After naming many of the runs on Vail Mountain, including famously Tourist Trap, we are thrilled to honor him with his own run for his enormous contribution to Vail’s success from before it was Vail all the way through today.”

Rod’s wife Beth, is an equally impressive figure in the history of Vail, founding an international interior design firm, Slifer Designs, and working tirelessly on numerous philanthropic and political causers throughout her career. In December of 2012, to recognize Vail’s 50th anniversary, RealVail.com interviewed Rod Slifer, and here’s that Q&A as a retrospective of all the former Vail mayor has done for the community:

Fifty years ago Saturday (Dec. 15, 2012), Vail Mountain’s original Gondola No. 1 out of Vail Village opened for business, although it was actually free that first day and filled with more sightseers than skiers.

There were two other lifts, and eventually a one-day lift ticket would cost $5. There was very little natural snow and absolutely no snowmaking. It was an inauspicious beginning for what would become the largest and most popular ski area in the United States.

Pete Seibert, Vail’s late founder, recalled in his book, “Vail: Triumph of a Dream,” that on one January day that first season he counted a grand total of 12 paying customers. Now Vail can see up to 20,000 people on a busy Saturday. Seibert’s eight instructors in 1962-63 often had no one to teach.

Seibert’s assistant ski school director that first season was Rod Slifer, who came to Vail after a couple of seasons at Aspen and worked for Vail Associates the first three seasons for about $500 a month plus tips. He survived on the occasional real estate sale and by running a small property management company.

Fifty years later, Slifer is a founding partner in Slifer Smith & Frampton Real Estate, which in 2005 topped $1 billion in sales for the first time. He also served more than 16 years on the Vail Town Council – 11 of them as mayor.

To honor Vail’s 50th anniversary, RealVail.com throughout the season will periodically talk to some of the founders and most influential people from Vail’s rich and varied history. Here’s our first installment, a Q&A with Rod Slifer, who in January — along with his wife Beth (founder of Slifer Designs) — will be inducted into the Colorado Business Hall of Fame.

RV: It’s obvious why you couldn’t make much of a living as a ski instructor in those early years, but why was property management more lucrative than real estate sales?

RS: “When they formed Vail Associates they sold 100 limited partnerships at $10,000 each, and each partnership got equity, four lifetime lift passes and the right to pick out a residential lot for an additional $250. But they had to start construction on it within a year.

“So Vail didn’t give them a deed right away; they had a lease. When they started construction at some point in time after that they would give them a deed and then they’d go out and borrow money. That’s how [Vail Associates] controlled speculation. You couldn’t transfer that lease. That was very smart on their part to eliminate that speculation.

“That first year we probably had in round numbers about 25 houses built – some quite modest, some a little bigger – but everything in those early days was pretty modest. Nothing terribly fancy.”

RV: So the original lots sold between $5,000 and $15,000 but the investing partners snapped up all the best locations, leaving very few prime lots for sale to the general public, correct?

RS: “There weren’t enough sales to make a living. In 1963 there was a need for people’s apartments and homes to be managed, and I formed Vail Home Rentals and I did that for a long time.”

RV: You later sold that company. What led to the formation of Slifer Smith & Frampton, which dominates residential sales in the Vail Valley today?

RS: “Harry [Frampton] came here as president of Vail Associates [1982-86]. When he left Vail Associates, he and Mark Smith were going to form a real estate company primarily in Beaver Creek, and they had lined up the guys who were working for Vail Associates at the time.

“I said to Harry, who I’d really gotten to know when I was mayor and he was president of Vail Associates, that, ‘I hate to see us be competitors. Why don’t I put my company and you put your company together and let’s not be competitors?’ It took a little while to convince him to do that, but we did and it’s worked OK … so far.”

RV: Before that, though, you took a bit of a financial detour and got directly into the ski business with Pete Seibert after he left Vail Associates in the late 1970s over concern about litigation in the wake of the 1976 gondola crash in Lionshead that killed four. Tell us about your partnership with Pete to buy Snowbasin, Utah, which in 2002 was a venue for the Winter Olympics.

RS: “Our timing couldn’t have been worse. We were under-financed. We did put together a partnership and acquired the ski area, but interest rates were from like 18 to 22 percent. We had to borrow money and it was just a backbreaker. We just didn’t have the financial ability to hang on.

“We operated it for several years but we finally had to sell and sold it to Earl Holding, who subsequently bought Sun Valley. Earl was from Utah, a very wealthy guy. He owned Sinclair Oil, Sinclair Refining and a big hotel in Salt Lake City. He took us out of our misery.”

RV: You have seen a lot of different ski-company regimes come and go in Vail, and many of them you dealt with as a politician and a businessman. Texas oilman Harry Bass took over after Pete, then George Gillett bought the company from Bass. Finally, the Wall Street era kicked off in the early 1990s after George lost the company in bankruptcy and Leon Black and Apollo Advisors took over. How did all of these different owners treat Vail?

RS: “The one thing all those people did in common was none of them took money out of the company. Every penny they made they reinvested in Vail, and that was even true of Harry Bass when Vail Associates bought the land that subsequently became Beaver Creek. Harry dumped all the profits and a lot of his personal money into Beaver Creek [in the 1980s}.

“They made money whenever they disposed of their interest because it had gone up in value a lot, but none of them took money and they were very farsighted to just keep investing and improving Vail and then Beaver Creek.”

RV: What’s the biggest difference between then and now in terms of doing business in this town?

RS: “The one difference then compared to today is everybody was onboard. Everybody in town from a waiter to a bus boy, everybody was just headed the right direction and trying to be service-oriented and make Vail a great place. People came and they wanted to make sure they came back, so it’s not like today when you have different political views and some people want growth and some no-growth, but that didn’t exist in those early days.”