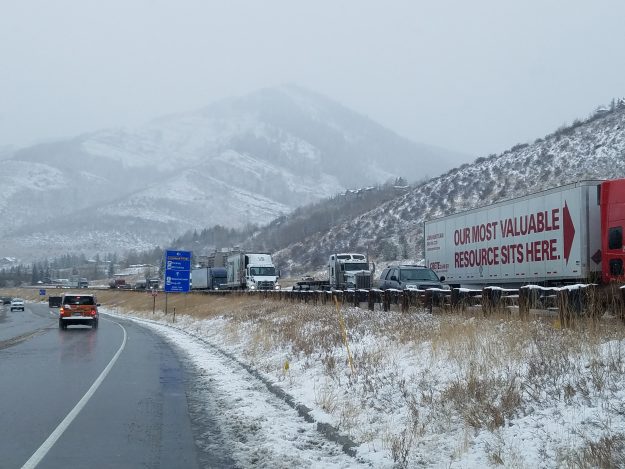 A grand legislative bargain to ask voters for a sales tax increase to pay for Colorado’s badly crumbling roads and bridges was sent headlong into the ditch on Tuesday by three tax-adverse Republicans in a Senate committee.

Co-sponsored successfully in the Democrat-controlled House by Eagle and Routt County state Rep. Diane Mitsch Bush, HB 1242 would have asked voters in November to approve a sales tax increase from 2.9 percent to 3.52 percent to generate $680 million a year and allow for $3.5 billion in bonding to maintain and improve badly deficient roads and bridges, including Interstate 70 between Vail and Denver.

The bill passed the House but was killed by three Republicans in the Senate Finance Committee despite sponsorship and support from GOP Senate President Kevin Grantham. The bill’s failure once again marks an end to bipartisan attempts to increase Colorado Department of Transportation funding hampered by lagging gas taxes that have not been upped since the early 1990s.

“While I am disappointed by today’s outcome, I am hopeful that House Bill 1242 has started a conversation that must continue if we are going to have a transportation system that keeps us out of traffic jams and helps Colorado businesses generate jobs for our people,” House Speaker Crisanta Duran said.

“The people of Colorado expect us to have the courage to tackle difficult problems, and I thank my co-prime sponsors – President Grantham, Sen. [Randy] Baumgardner and Representative Mitsch Bush – for their leadership and effort on this especially hard problem. I also thank the members of the House and Senate, from both sides of the aisle, and the hundreds of local business and civic leaders around the state who lent their support to this crucial piece of legislation.

“Collaboration and problem solving should always be more important than politics. I pledge to continue to seek transportation solutions that help us remain economically competitive and support our superb quality of life.”

“It is extremely disappointing that just three Senate Republicans stood against the very tenants of TABOR {Taxpayer Bill of Rights] and refused to let the people of Colorado vote on whether to tax themselves to improve our crumbling transportation system,” said Pete Maysmith, executive director of Conservation Colorado.

“Coloradans from across the state weighed in and said they wanted a way to fix our roads and bridges, build safer sidewalks and routes to schools, and  invest in infrastructure to move people, not just cars,” Maysmith added.

Several ballot initiatives have been submitted to the Colorado Secretary of State’s Office to do what the Legislature was unable to accomplish. The three Republicans who blocked the tax question simply going to the voters are Sens. Tim Neville, Owen Hill and Jack Tate.

“A new tax is not the way we need to fund this right now,” Hill, a Colorado Springs Republican, told the Denver Post, arguing existing tax revenues should pay for transportation, even if that money has to come from health care or education spending. “We get a billion new dollars every single year. It’s wrong, it’s unfair, to go back and tell taxpayers you have to pay more taxes because we have not been responsible.”