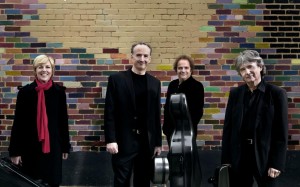 Recognized as one of the world’s great ensembles, the Takács Quartet plays with a unique blend of drama, warmth and humor, combining four distinct musical personalities to bring fresh insights to the string quartet repertoire. The performance will showcase their brilliant musicianship and versatility, paired perfectly with the acoustic beauty of the VPAC. Tickets to Takács Quartet are $58 for adults/$10 for students and are on sale now at the VPAC Box Office (970.845.8497/ www.vilarpac.org). The VPAC is located under the ice rink in Beaver Creek Village (68 Avondale Lane, Beaver Creek, Colorado).

Takács became the first string quartet to win the Wigmore Hall Medal in May 2014. The Medal, inaugurated in 2007, recognizes major international artists who have a strong association with the Hall. Recipients so far include Andras Schiff, Thomas Quasthoff, Menachem Pressler and Dame Felicity Lott. During their 2016-2017 season, the ensemble will perform complete 6-concert Beethoven quartet cycles at the Wigmore Hall, Princeton, the University of Michigan, and at UC Berkeley.

In 2012, Gramophone announced that Takács was the only string quartet to be inducted into its first Hall of Fame, along with such legendary artists as Jascha Heifetz, Leonard Bernstein and Dame Janet Baker. The ensemble also won the 2011 Award for Chamber Music and Song presented by the Royal Philharmonic Society in London.

The members of the Takács Quartet are Christoffersen Faculty Fellows at the University of Colorado Boulder. The Quartet has helped to develop a string program with a special emphasis on chamber music, where students work in a nurturing environment designed to help them develop their artistry. The Quartet’s commitment to teaching is enhanced by summer residencies at the Aspen Festival and at the Music Academy of the West, Santa Barbara. The members of Takács are Visiting Fellows at the Guildhall School of Music and Drama, London.