Ligety conjures ghosts of Olympics past with top five in alpine combined; eyes another Korean podium in GS 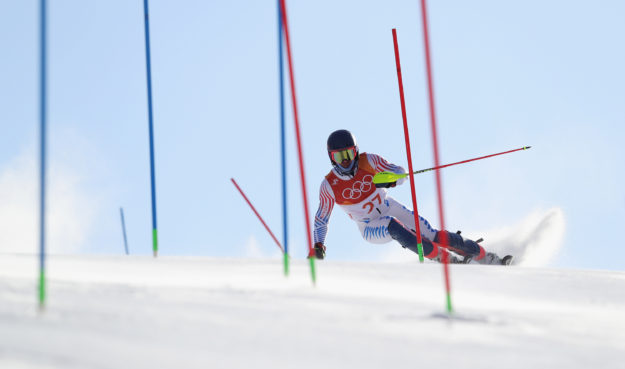 Oh yeah, that’s more like it. The Olympics have kicked off, with Colorado snowboarders grabbing medals and poised to snag more, and both Vail and Beaver Creek have received around two feet of new snow in the last week, with more on the way by the weekend.

Better still, the alpine skiing events finally got underway at Pyeongchang, and EagleVail’s Mikaela Shiffrin will try to defend her 2014 Olympic gold medal in slalom Tuesday night (Wednesday in South Korea) at the Yongpyong Alpine Centre. The second and decisive run will be 9:45 Mountain Time on NBC.

Earlier in the evening on Tuesday (6:30 Mountain Time), watch as 19-year-old Eagle snowboarder Jake Pates competes with the best in the world in the men’s halfpipe final featuring heavy favorite Shaun White bidding for his third career Olympic gold medal at the Bogwang Phoenix Park.

On Monday (Tuesday in Korea), Park City’s Ted Ligety, a multiple World Cup winner in giant slalom on Beaver Creek’s Birds of Prey course, summoned ghosts of Olympics past with his fifth-place finish in the men’s combined event — the first alpine ski race of the wind-plagued 2018 Pyeongchang Winter Games.

I was in Sestriere, Italy, at the 2006 Torino Winter Olympics when a 21-year-old Ligety shocked the world with a gold medal in the combined event. Six-time Olympic medalist Bode Miller was leading by a wide margin after the downhill but hooked a tip and failed to finish the slalom, handing Ligety the win (great to hear Bode’s commentary on NBC, as Miller is an always-interesting interview).

I can’t say Ligety’s 2006 win was totally out of the blue, though, as he had climbed on his first World Cup podium earlier that season at Beaver Creek. Still, he didn’t get his first World Cup win until a giant slalom a few weeks after claiming that Olympic gold in Italy. His first win on the circuit? You guessed it: a giant slalom at Yongpyong, South Korea, in March of 2006.

Ligety told me later the combined gold was nice but what he always really wanted was a gold medal in his best discipline of GS — a discipline he dominated for a long stretch, winning by improbably huge margins before succumbing to injury a few years back. Now he seems fully recovered and perhaps ready to defend the GS gold he finally won at the 2014 Sochi Winter Olympics — and on a course where he’s won before.

If on Saturday (Sunday in Korea) Ligety is able to somehow upset the favored Austrian superstar Marcel Hirscher — who won his first career Olympic gold in the combined on Tuesday — Ligety would become the first American to ever win three Olympic gold medals in alpine skiing. He’s already the first American man to win two golds, although Shiffrin could match that mark and join Andrea Mead-Lawrence as the only American woman with two golds if she defends her slalom gold Tuesday night.

Speaking of Shiffrin, an old blog I posted after interviewing her twice during the 2015-16 ski season is getting quite a bit of traffic lately. At the time I was stringing for ESPN.com and wrote a story about her recovery from the first (and hopefully last) significant injury of her stellar career. Also a freelancer for People Magazine, I asked about her dating life, and she replied, “I’m single and ready to mingle.”

Another blog I posted back in 2014 that’s getting some serious traffic of late focused on the multiple knee injuries of Vail’s Lindsey Vonn — both the initial one at the 2013 World Championships and then the re-injury at Copper Mountain that cost her the 2014 Winter Games. Notable there, she switched from Sterett to Dr. Jim Andrews for the second round of surgery, and that old information is drawing new eyeballs.

At that time, Vonn was dating golf superstar Tiger Woods, but that relationship has since ended, and so has Vonn’s subsequent relationship with NFL assistant coach Kenan Smith, according to People Magazine. Now she’s the one who’s single, although apparently not ready to mingle until she takes her best shot at another downhill gold to go with the one she claimed at the 2010 Vancouver Winter Olympics (your remember Vonncouver, right?).

In the interest of equal time for those of you who like to know the relationship status of their favorite Olympians (and based on my web traffic of late, that’s quite a few of you), Ligety married his longtime girlfriend, Mia Pascoe, in 2015. At age 33 this may be his last Games, so it would be great to see him go out in style. He’s always been a very good interview — thoughtful and willing to take on sticky topics like global climate change.

Ditto for Vonn, 33. I’m pulling for her to match Ligety’s twice-golden mark for a lot of different reasons — not the least of which is her willingness to go out on a limb and decry the divisive crap spewing from the White House these days (my words, not hers). No knock on Shiffrin (she wasn’t even 21 at the time), but I asked her about climate change back in 2015 and could tell I caught her off-guard. She recovered nicely, though.

Asked if she thought athletes should speak out on social issues such as climate change, Shiffrin joked: “I probably won’t be able to say anything extremely intellectual, so any scientists out there should just stop reading right now. But totally we should try to limit the carbon footprint.”

Shiffrin at 22 is a robotic creature of conditioning and training habits dating back 15 years. It’s clear she really loves carving icy turns on terrible snow that recreational skiers hate and racers love. In this recent Wall Street Journal story, Shiffrin admits to the skiing sacrilege of not really liking powder days.

Skiers like me can appreciate watching a perfectly arced GS turn on an icy, rutted course, but we live for powder days and eschew bombing groomers unless there’s nothing else to do. Notable that Shiffrin learned her craft back east but still keep her home here in EagleVail. And Vonn wisely fled the icy mounds of Minnesota for training at Ski and Snowboard Club Vail and now keeps her home in East Vail.

She’s only the greatest female racer in history with the women’s record of 81 World Cup wins. That’s 122 combined World Cup wins for two racers who call the Vail Valley home. Not too shabby, and now they can both become the first American women to ever win two or more Olympic gold medals in their careers.

If Vonn wins two medals (say in downhill and super-G, the way she did in Vancouver), she’ll tie recently retired Julia Mancuso for the most Olympic medals in alpine skiing by an American woman (four). Shiffrin will need medals in three events to match Mancuso’s mark, and she should be competitive in slalom, GS and combined.

Mancuso, by the way, dated Norway’s Aksel Lund Svindal for four years before splitting up in 2013. Svindal pulled out of Tuesday’s combined event after the downhill run, but he’ll be a force in super-G and downhill at these Games. And Mancuso last year married fellow surfer and resort GM Dylan Fish.