Eagle-Vail’s Mikaela Shiffrin snapped a 34-year American women’s winless streak at Aspen on Saturday, claiming a World Cup slalom by 3.07 seconds — the greatest margin of victory ever on the slalom circuit. 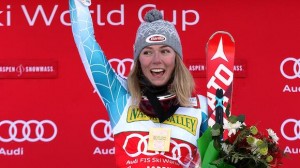 Shiffrin almost broke the Aspen jinx on Friday when she swooped down the giant slalom course with a more than six-tenths of a second lead before skiing too straight in the final gates and crashing. Vail’s Lindsey Vonn, coming back from a string of injuries, also crashed out in Friday’s GS and was not planning to race in the weekend slalom events at Aspen.

Instead, Vonn, 31, is focused on the speed events at Lake Louise, Canada, next week, where she’s won a stunning 15 times out of her overall women’s career record of 67 World Cup victories. By comparison, however, Vonn had just one World Cup win at Shiffrin’s age in 2004 — a downhill at Lake Louise in December of 2004.

Vonn didn’t win here second race until she was 21 in Lake Louise the following winter. Shiffrin, who doesn’t turn 21 until March, now has a sweet 16 of World Cup wins — 15 in slalom and one in GS.

Here’s the full press release from the U.S. Ski Team on Shiffrin’s record-shattering win on Saturday in Aspen:

ASPEN, CO (Nov. 28, 2015)—It was a historic day at the Nature Valley Aspen Winternational, as Mikaela Shiffrin (Eagle-Vail, CO) dominated her competitors by over three seconds to take the first American slalom win at Aspen since 1981.

It had been a high and dry 34 years, with no American standing on top of the podium at Aspen since Tamara McKinney won in 1981. And Shiffrin didn’t just break the record; she annihilated it, winning the race by 3.07 seconds. That margin broke yet another record—it was the largest women’s slalom win margin since 1968.

“It’s a special day. I was a little bit nervous, but I handled it well,” said Shiffrin. “My skis were great. Everything set up perfectly. I don’t know if the stars will ever align like that again.”

Shiffrin finished ahead of Veronika Velez Zuzulova of Slovakia and Frida Hansdotter of Sweden. “I really charged! I fought hard in the second run,” said Shiffrin, who crashed two gates from the finish in yesterday’s GS. “[Yesterday] was a big disappointment, so I had some anger. I took that into today.

Resi Stiegler (Jackson, WY) was the only other American to make the flip, taking 15th place. It was her first race back after her knee injury. “I was really nervous today. It was my first World Cup back and I did some intense coming back this time! I wasn’t really sure where I was standing,” said Stiegler. “I just went for it and tried to learn a lot since luckily we have two World Cups. We can really take something from today into tomorrow.”

Shiffrin and her teammates will race slalom again on Sunday before she heads to Lake Louise for the super G. The race will air live in NBC at 3 p.m. ET.

Mikaela Shiffrin
I really charged! I fought hard in the second run. [Yesterday] was a big disappointment, so I had some anger. I took that into today.

My teammate Resi Stiegler gave a pretty epic course report. She said ‘this thing is a ripper.’ When you get through that flush and come over the breakover to the last pitch, she said, ‘that’s your section!’

It’s a special day. I was a little bit nervous, but I handled it well and I definitely had a lot of support—my coaches, my parents and everybody were like, you know what, you know how to ski slalom. Forget about the nerves and just do your thing. They all said the right stuff. My skis were great. Everything set up perfectly. I don’t know if the stars will ever align like that again.

I’m really excited to get back on this hill tomorrow. We don’t ever get a chance to do two slaloms in a row and I often feel after a slalom race, I want to ski another race the next day. Hopefully, I can get back to my room, get a little nap in, get some rest time and come out tomorrow and attack again.