Shiffrin wins again in Aspen by another huge margin

Eagle-Vail’s Mikaela Shiffrin made sure American ski racing fans wouldn’t have to wait another three and a half decades for a U.S. Ski Team victory at Aspen, claiming her second straight World Cup slalom by a huge margin on Sunday. 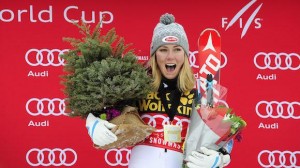 Shiffrin, 20, was just two gates from making it a sweep in Aspen, crashing out with the lead at the end of the second run of giant slalom on Friday. She came right back with a slalom win on Saturday, setting a new record for the greatest margin of victory in the discipline with a 3.07-second win.

With her second-place finish in the opening GS in Soelden, Austria, last month, the American has the early lead in the overall chase, although no speed events have been contested. Shiffrin now has 17 career World Cup wins (23rd historically), just one behind Tamara McKinney in the 22 spot.

McKinney was the last American woman to win in Aspen, claiming a GS there in 1981. Here’s the full press release from the U.S. Ski Team on Shiffrin’s win on Sunday:

After dominating the field in Saturday’s slalom by over three seconds, Shiffrin showed that she wasn’t letting off the gas. On the first run, she came through the lights 1.99 seconds ahead of the next fastest female, and would eventually win the run by 1.69 seconds. She came out attacking on the second run and bobbled on the second gate, before calming down and ripping to the bottom. She took the win by 2.65 seconds and her teammates Paula Moltzan (Lakeville, MN), Katie Ryan (Aspen, CO) and Resi Stielger (Jackson, WY) hoisted her on their shoulders to celebrate.

“It was really exciting. I had three great races, really,” said Shiffrin. “The GS was disappointing, but still a great race. And today was awesome; yesterday was awesome. I’m walking away from my U.S. part of the World Cup tour very happy this year.”

Stiegler also had a fantastic day, skiing into the top 10 for the first time since a ninth-place finish in Zagreb in 2013—a race that Shiffrin also won. Stiegler’s 10th place finish solidified her comeback, showing her hard work after a knee injury paid off.  “It was cool to get in the gate and be that strong and solid,” said Stiegler after her run.

Saturday’s win was the first time since 1981 that an American woman won in Aspen, when Tamara McKinney was victorious in a giant slalom. 34 years, 8 months and 20 days later, Shiffrin broke the record. One day after that, Shiffrin won again. With Shiffrin’s victory and Resi Stiegler’s top 10 and top 15 results from the 2015 Aspen Winternational, the Americans are looking sharp for Aspen’s World Cup Finals in 2017.

Shiffrin packs up to head to Lake Louise to race super G with the speed team, while the rest of the teach team heads to Are, Sweden.

It was really exciting. I had three great races, really. The GS was disappointing, but still a great race. Today was awesome; yesterday was awesome. I’m walking away from my U.S. part of the World Cup tour very happy this year.

I woke up this morning and I thought, oh my gosh! What if everyone was just joking [about my result yesterday]! What if they were just faking it and I wasn’t that fast? I thought, you have to attack today—don’t go any slower, try to pick it up. I think everybody else pushed it a little harder too. I tried to push it hard, too. I was happy with that.

[The second run] was really rough. Once again, it was a fight. After the GS and yesterday, I learned that I can still be fast in the second run going last and I just have to really attack. Maybe making that mistake on the top part wasn’t fast, but it’s not necessarily the worst thing in the world if I’m pushing it. I was and I picked it up pretty soon after that.

Resi Stiegler
It was awesome, actually. I was pretty nervous and getting a little tired. We’ve had an incredibly amazing time here in Colorado, but it’s long. It’s a lot of interviews, people, family, skiing, high elevations. Just coming to the end, you’re like whoa! I have to focus all the way to the finish. Obviously the last couple of runs the finish part was the hardest for me. I just got in the gate and was like, you’re working that ski as hard as you can all the way to the bottom! You don’t have to go crazy; you just have to push harder. I’m pretty happy with how it ended.

It was cool to get in the gate and be that strong and solid.