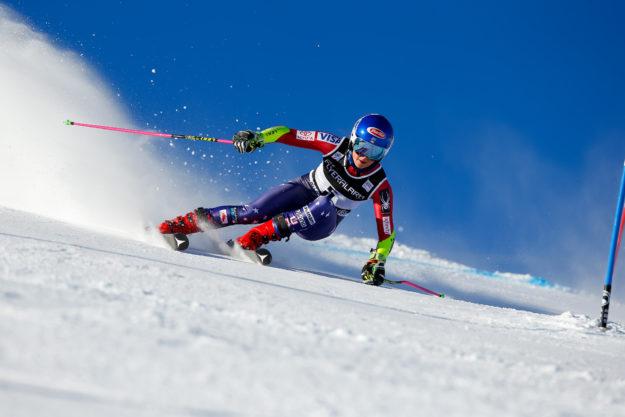 At 22 years of age, EagleVail’s Mikaela Shiffrin is now all alone in eighth place on the all-time women’s World Cup victory list with 34 wins after claiming a giant slalom by nearly a full second in Courchevel, France, Tuesday.

Shiffrin’s third win of the season clinched an Olympic berth for the 2018 Pyeongchange Winter Games, and made the 2014 slalom gold medalist a favorite to also claim a GS medal. Shiffrin also has wins in slalom and downhill this season.

Coming off a victory in a super-G in Val d’Isere, France, on Saturday, Vonn skipped Sunday’s race with a sore knee and also did not compete in Tuesday’s GS.

Shiffrin beat out GS world champion Tessa Worley of France by a combined two-run time of .99 seconds on Tuesday.

“I’ve been feeling better and better with my GS. But sometimes I get to the race and I get nervous,” Shiffrin told the Associated Press between runs of GS. “I got a little bit mad in the start gate and a little bit angry. It was aggressive, so it was a good mentality.”

Tuesday marked just the fifth GS win of Shiffrin’s career, with most of her victories coming in slalom.

“It was a bit scrappy at some points, but that was the tactic today,” Shiffrin said. “I tried to be really aggressive, and almost went off the course a couple times. It was a really straight second run, so I was like ‘OK, you gotta take advantage of that!’ I’m really excited that I fought for it!”