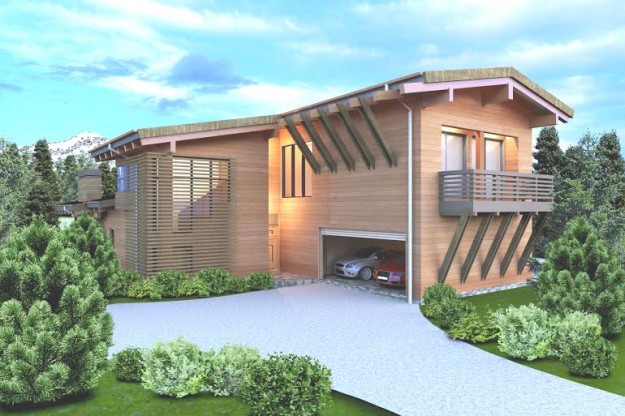 Editor’s note: A version of this story first appeared in the Vail Daily:

West Meadow Drive in Vail has long been a key connection between the town’s two major pedestrian cores of Vail Village and Lionshead. But for decades it’s become increasingly congested with vehicle traffic, much of it headed to the Vail Valley Medical Center.

Now the centrally located thoroughfare along Gore Creek is on the verge of becoming far more pedestrian-friendly and therefore more desirable as a residential neighborhood with the ongoing redevelopment of the 50-year-old VVMC property.

Well before and during his 21 years in Vail, Director of Community Development George Ruther says the town has been unsuccessfully grappling with how best to handle the vehicle traffic and lack of pedestrian connectivity along West Meadow Drive.

“The hospital’s master plan does that now,” Ruther said. “For the first time in 25 years we not only have a statement about the importance of getting vehicles off of West Meadow Drive, but we also have a way to do it.”

The VVMC redevelopment, which has begun first-phase construction on its west-wing expansion, will eventually relocate the hospital emergency room and main entrance to South Frontage Road, thereby removing 1,400 vehicle trips a day from West Meadow Drive.

Once completed, the redevelopment will reduce vehicle traffic to 50 loading and delivery trips a day, the in-town bus service and the very limited local traffic to homes along West Meadow Drive.

“For the connection between Vail Village and Lionshead, we’re going to see approximately 90 percent of that traffic removed, so it’s going to become a much more comfortable pedestrian zone,” Vail Mayor Andy Daly said. “That’s going to be an important enhancement, and from the town’s perspective [the hospital project] ensures another level of economic stability that we can look forward to for the next 15 to 20 years.”

Since the early 2000s, Vail’s billion-dollar “New Dawn” redevelopment has injected new vibrancy into the west end of the Tyrolean-tinged pedestrian core of Vail Village with projects such as the Four Seasons, Solaris and the Sebastian. Similarly, the Arrabelle at Vail Square, Antlers and Ritz-Carlton Residences, to name a few, have revitalized Lionshead.

“Finally, the town of Vail and its commercial interests have put forward a plan to make all of Vail a unified pedestrian village,” said Ted Steers of the Vail Real Estate Center. “There’s a plan to remove 90 percent of the traffic from West Meadow Drive and allow the final connection of Vail Village and Lionshead to be complete and pedestrian-friendly.”

A key component of the plan is a land swap between Vail Resorts, the Evergreen Lodge – which is planning its own redevelopment – and the hospital.

“The terms of the deal are not public at this time,” Ruther said in mid-June. “I can say, however, it likely results in a win, win, win for all parties involved. It’s also likely additional benefits will be realized by the community as well.”

More public-use areas, parks and streetscape improvements will generally add to the overall pedestrian experience along West Meadow Drive, as well as improve the neighborhood for homeowners long inundated with vehicle traffic.

Between the Vail Golf Course and Cascade Village, Steers says there are only eight residential home sites — each zoned duplex — on this north side of Gore Creek.

“These are particularly special because they feature both river frontage and forested mountain views,” Steers said. “Each of these homes has a long history of family legacy; without any indication of this changing in the near future.”

He’s currently working on the construction of a new home on one of those sites at 182 W. Meadow Dr. – a six-bedroom (option for a seventh) modern, European-chalet-style duplex with a private drive set back far from public pedestrian traffic. The home will have all the in-town access without the impacts.

Its creative, contemporary design allows for maximum privacy and independence from the other half of the duplex, including a secluded creek-side hot tub and a second living area with bar and media center. Steers points out the rarity of a home becoming available along West Meadow Drive.

“I am aware of only three transactions in the history of Vail, so 182 W. Meadow Drive will be the first large-scale, multi-generational home available for sale on this stretch in a generation,” Steers said.

Vail Homeowners Association Director Jim Lamont, a West Meadow Drive resident, says his membership is generally supportive of the hospital project and the reduced traffic along the key connector route. However, Lamont is intent on making sure the residential neighborhood around the hospital is protected and enhanced.

“While the Vail Homeowners Association supports the expansion of the medical center, it believes that it should be done in a way that is responsible and in keeping with the overall qualities of the existing neighborhood,” according to the VHA website.

In various public meetings during the approval process, Lamont expressed satisfaction with the consideration given to area residents by hospital and town officials.

“What we have done here, for the first time, is to create substance out of ether,” Lamont said during one meeting. “We have more substance than we have ever had on this parcel of land and with this institution.”

“In all my years with the Town of Vail, that was probably one of the most thorough and respectful public planning processes I’ve ever participated in,” Ruther said. “While there was still some disagreement by some and they would have liked to have seen some things differently, there was this cordialness and a cooperative effort that as a planner was a fantastic experience.”

The Vail hospital didn’t move to Meadow Drive until five years after the ski area opened in 1962. For the first five years it was a small clinic in first the Red Lion building and later the Mill Creek Court Building. But once it landed on Meadow Drive in 1967, the hospital really took off.

Numerous wings were added over the ensuing decades, creating a hodgepodge of styles and designs that ultimately led to a complex that’s somewhat of a rabbit’s warren wedged into the heart of the nation’s most popular winter-sports resort. But, as problematic as the location and facility have become over the years, moving elsewhere has never been a serious consideration.

“The hospital is making a concerted effort to remain in the community, and that’s profound,” Ruther said. “I’ve never doubted that it would be far easier to just pick up shop and shut the lights off on Friday and move into a new medical facility on a green-field site somewhere else that was already built.”

In fact, the project will take much longer to complete because it will be done in phases so it can remain a functioning facility during the redevelopment. But once done it will solve many problems, not the least of which was too much traffic on West Meadow Drive.

When all is said and done, the Vail Valley Medical Center will satisfy all of its parking requirements, relocate its helipad to a location on the hospital campus that doesn’t require additional transport into the facility, and meet all of the town’s employee housing regulations.

“Most importantly, the hospital is a $30 million contributor to the Vail economy and our second largest employer, and the efforts that they’re taking to remain in the town of Vail shouldn’t be overlooked,” Ruther said.

Mayor Daly points out the expansion and redevelopment allows the VVMC and the world-renowned Steadman Clinic to continue to be a global leader.

“For the hospital it really charts its future for the next 20 years, and it’s a vibrant, exciting future that allows it to be one of the top orthopedic centers in North America, if not in the world,” Daly said. “Some of the things the hospital is doing with Steadman-Philippon supporting new stem-cell research to promote the use of joints is going to be very, very exciting and continue to keep Steadman-Philippon and the Vail Valley Medical Center in the limelight for quite a while.”

It’s anticipated a building permit for the first-phase west wing expansion will be issued in early August, with the contractor estimating a 20-month construction schedule. At that point, work will begin on the east wing expansion.

For more information on the Vail Valley Medical Center redevelopment, go to the VVMC website, or check out the master plan on the Town of Vail website. To find out more about the unique opportunity to own a home along Gore Creek at 182 W. Meadow Dr., go to the Vail Real Estate Center website.