Memorial Day Weekend could be a little moist in the mountains and downright wet along the state’s Front Range, but at least there will be multiple ski areas open so snow riders can celebrate the start of the summer season in style. 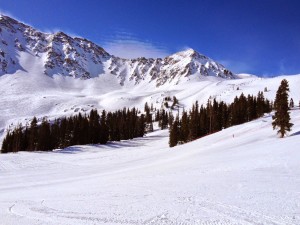 Arapahoe Basin, originally scheduled to shut down June 1, will re-open for at least one more weekend on June 6-8. And the Basin could stay open beyond that date if conditions warrant an extension. However, A-Basin COO and Vice President Alan Henceroth this week announced the closure of the North Side terrain and the Pali Lift.

“While there is still a great deal of snow over there, conditions are such that it is time to put her down for the season. And it has been an extraordinary season over there,” Henceroth wrote. “Zuma Lift will be open through June 1 and Black Mountain Express and Lenawee Mountain Lifts will be open until the end (whenever that may be). We have a lot of fun to go.”

A-Basin was still reporting a 76-inch base on Tuesday, and the coming weekend weather could add to that total.

“Look for thunderstorms in the eastern foothills and plains Wednesday through Memorial Day, with afternoon showers over the mountains Friday, Saturday, and Sunday,” Opensnow.com meteorologist Joel Gratz reported Tuesday.

Gratz added that the Front Range could see some serious soaking Sunday into Monday, which means events like the Boulder Bolder 10K on Memorial Day could be a little interesting.

“One thing to watch out for: the possibility of heavy rain along the front range and foothills on Sunday into Monday,” Gratz warns.