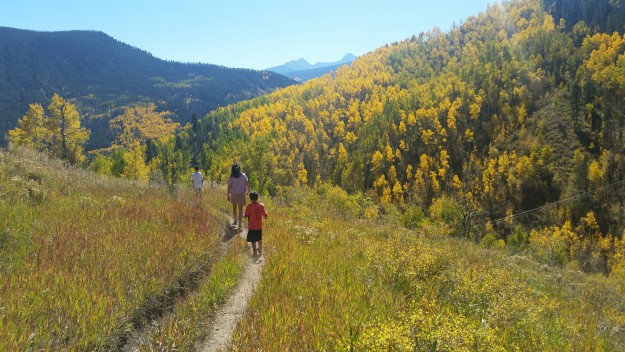 Fall colors along the North Trail in West Vail.

With temperatures soaring into the upper 70s and even low 80s into late September, it’s hard to imagine ski season being less than a month away in Colorado’s high country.

The leaf-gaping has been spectacular, but the ski areas that jockey to open first in the state, if the not the nation — Arapahoe Basin and Loveland — are already talking about snowmaking. Both resorts typically open by mid-October. Vail and Beaver Creek won’t open till Nov. 20 and Nov. 25, respectively.

“Loveland’s snowmaking team typically starts making snow the last week of September in preparation for a mid-October opening,” the resort’s website reports. “Expert local crews and professional snowmakers from New Zealand work around the clock to ensure Loveland is one of the first resorts to open for the season with a full top-to-bottom run covered from tree-to-tree with an 18″ base.”

Arapahoe Basin Chief Operating Officer Alan Henceroth said on Wednesday that crews were doing snowmaking training and orientation last week and ran some of the resort’s snowmaking guns on High Noon trail, but only for testing.

“Temperatures are still only getting down to the mid and high 30s at night,” Henceroth wrote on his blog. “That is not quite cold enough. Right now the forecast for the next several days is still fairly warm.”

Somewhat colder temperatures and possible precipitation are both in the forecast for next week.

“Looking ahead to next week, a storm that is cut off from the main flow of weather will likely push into the California area by mid week, and it might then head toward Colorado later next week,” Opensnow.com meteorologist Joel Gratz wrote earlier this week.