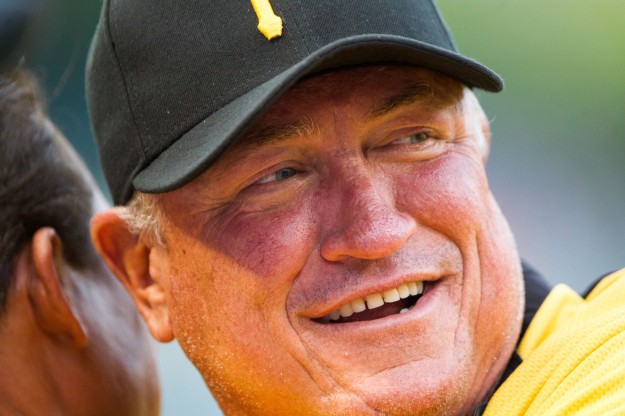 I’m a big believer in the Law of Unintended Consequences (LOUC) generally raining down ruin, whether it’s in the world of sports or just the world. A subparagraph in the unofficial LOUC statute is the IIABDFI dictum: If it Ain’t Broke, Don’t Fix It.

For instance, the United States ousted a brutal dictator in Saddam Hussein by invading Iraq in 2003, but now that dubiously well-intentioned but ill-advised preemptive strike has unleashed thousands of head-hunting Jihadists in 2014, which taxpayers around the globe will apparently be ponying up to bomb well into the foreseeable future.

Similarly, though obviously far less consequentially, the Colorado Rockies stupidly jettisoned the best manager in team history when they showed Clint Hurdle the door in 2009 after taking the team to the World Series in 2007 followed by just one bad season in 08.

Now Hurdle, bad hip and all (and no pain meds), is taking one of the worst teams in recent baseball history – the Pittsburgh Pirates — to the playoffs for the second straight year. The Rockies have done nothing since Jim Tracy took over Hurdle’s 09 team and piloted it to an early exit from the playoffs.

And on the topic of bad hips, I’m reminded of the Rockies’ rock throughout those distant playoff runs: Shortstop Troy Tulowitzki, who wears No. 2 in honor of retiring Yankees’ icon Derek Jeter but would look so much better in Cal Ripken’s No. 8 if he could even remotely emulate the Iron Man’s durability.

Instead, Tulo recently had the same surgery Vail’s Marc Philippon performed on Jeter teammate Alex Rodriguez. Tulo may never lead the Rockies to the Promised Land again, and he almost certainly won’t be replacing his idol Jeter, who left New York in grand style last night with a clutch, walk-off hit.

I grew up and Orioles fan, hating the Yankees and Red Sox, but even I was psyched for Jeter last night, especially because the O’s still won the division and are going to the postseason and the Yankees and Sox area headed to their Florida homes to fine tune their golf games.

Again, I am pulling hard for a Pirates-Orioles rematch of the 79 “We are Family” Word Series, but even if that happens I’ll still be bitterly lamenting the ineptitude of the Rockies, who cast aside Hurdle (and Bucs’ second baseman Clint Barmes) and got nothing for pitcher Ubaldo Jimenez, who struggled but still contributed six wins for Baltimore this season.

Of course, I’ll grudgingly admit the Law of Unintended Consequences can work the other way as well.

For instance, if the best local sports owner of all-time, Pat Bowlen, hadn’t ousted a clearly past-his-prime Mike Shanahan in 2008 and inexplicably replaced him with the woefully unprepared Josh McDaniels, the Denver Broncos would still be stuck with Jay Cutler and never would have experienced the wildly entertaining albeit brief Tim Tebow Era followed by the magnificence (Super Bowl aside) of the Peyton Manning Era.

If the Broncos win a warm-weather Super Bowl closer to home in Arizona in February, we can thank McDaniels and the Law of Unintended Consequences.