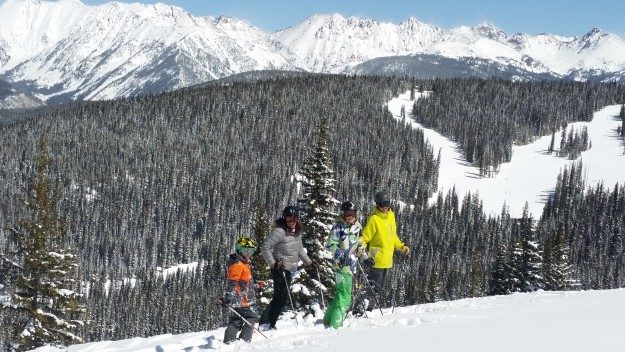 Families in Eagle County enjoy some great amenities, but also have some of the highest individual-market health insurance rates in the nation.

If you don’t think state Sen. Kerry Donovan, a Democrat who grew up in Vail, is doing all she possibly can to fix our skyrocketing health insurance rates in the individual and small-group markets here in Eagle County, check out this tweet she sent out Monday morning:

Donovan, a former Vail Town Council member who recently announced her reelection campaign for the state senate, realizes one of the biggest factors holding back small businesses and innovative sole proprietors in the Vail Valley is the fact we have some of the highest individual market health insurance rates in the state, if not the nation.

I wrote the story she linked to in her tweet, posting it on Colorado Politics over the weekend. The Denver Post carried an Associated Press story on how Colorado will be a little better off when open enrollment starts on Wednesday, but there still remains a lot of confusion in the wake of Republicans’ failed efforts to repeal and replace Obamacare.

But before I go any further, including re-posting my story in full below, if you’re in the market for a 2018 individual or small-group plan, you basically have only two choices in Eagle County — Anthem or Kaiser. But call Bethe Wright at The Wright Insurance Company in Eagle. She helped my family when we last needed our own insurance, and she is an absolute wizard when it comes to finding the best price.

In Eagle or Summit County, call or email Wright at (970) 328-6300 or bwright@vail.net. Also go to the ConnectforHealthCO.com website starting Nov. 1 to check out your options, and sign up by Dec. 15 in order to have insurance in place for 2018. Also, you can make an appointment with Mountain Family Health Centers for enrollment help by calling (970) 928-1614 or emailing enrollmenthelp@mountainfamily.org.

Back to the policy stuff. Federal inaction and the failure so far of bipartisan efforts to stabilize the Affordable Care Act has put pressure on the State Legislature to find some fixes for hard-hit mountain and rural counties when the legislature reconvenes in January.

Kelsey Mix, communications director for Republican U.S. Rep. Scott Tipton, told me the congressman is still hoping the Senate will act to fully dismantle Obamacare, but pointed to Tipton’s May vote to repeal the law. The House narrowly passed the American Health Care Act but the Senate never took it up.

“The Congressman voted to pass the American Health Care Act in May to repeal and replace the ACA and address the skyrocketing prices in the individual and small groups markets that you have referenced,” Mix said, adding state efforts are being closely watched. “Our office is following the conversations happening within the Colorado General Assembly related to stabilizing the state market.”

Former Democratic state Rep. Diane Mitsch Bush, who just quit the legislature to run against Tipton next year, tried unsuccessfully to pass a bill last session that would have raised the eligibility cap for ACA credits to 500 percent of the federal poverty level in rural areas. Her replacement in the House, recently named Democrat Dylan Roberts, says he is supportive of that effort and other possible bills to bring down rates for consumers in hard-hit mountain-resort and other rural areas.

With Obamacare open enrollment just days away on Nov. 1, some Western Slope residents are bracing for health-insurance premium spikes of more than 40 percent for 2018, while Congress continues to do partisan battle over whether to dismantle the law or just try to patch it up.

Colorado’s resort counties, saddled with some of the highest individual market rates in the nation the last several years, will see astronomical increases next year, with most counties limited to just one or two insurance providers. The majority of Coloradans get insurance through their employers, but small businesses and the self-employed face crippling rate increases, experts say.

In Eagle County, a family of five with teenagers will pay $2,040 a month for a Kaiser plan or $2,877 for an Anthem plan on the individual market, according to insurance broker Bethe Wright of The Wright Insurance Company in Eagle.

And those were the rates before President Donald Trump’s executive order earlier this month ending Obamacare’s Cost Sharing Reduction (CSR) payments for lower-income Americans. Now Wright says insurance companies will pass on those costs to all individual-market consumers, so anyone who already renewed for next year will see an additional increase.

“I am hearing premiums may increase an additional 6 to 10 percent over the already staggering renewal premiums,” Wright said. “This is a very emotional topic for all my clients and the 8 percent of Coloradans who purchase their own insurance.”

Republican Colorado Sen. Cory Gardner blames Obamacare, or the Affordable Care Act, but says he’s doing what he can to provide temporary relief despite the Senate’s failure this summer to repeal and replace the 2010 law.

“The Western Slope has been one of the hardest hit areas of Colorado from the failures of the Affordable Care Act as premiums have skyrocketed and are set to go up as much as 32 percent in some counties in the region next year,” Gardner said via a spokesman. “Facts like this are why I have voted to repeal this failed law.”

Last month Gardner introduced the Healthcare Tax Relief Act to continue for one more year the ongoing suspension of Obamacare’s Health Insurance Tax (HIT) — a fee paid by insurers on health policy premiums. Gardner testified about his bill on the Senate floor Wednesday.

“Without congressional action, this tax will cost individuals and families hundreds of dollars. I expect to have broad bipartisan support on this legislation, and will do everything I can to move it forward,” Gardner said, adding he’s also monitoring and considering other Senate bills such as Murray-Alexander and Hatch-Brady aimed at shoring up Obamacare in the short term.

“There are some proposals being discussed that would try to make short-term fixes to slow the increase of premium prices,” Gardner said. “I’ll look at them and any other measures that try to fix this law, but we still need permanent solutions.”

Small businesses on the Western Slope, especially in high-priced resort areas, are being crushed by steadily rising insurance rates, according local officials who backed a bipartisan plan proposed this summer by Colorado Gov. John Hickenlooper and Ohio Gov. John Kasich.

Hickenlooper, Kasich and eight other Democratic and Republican governors recently sent another letter urging the Senate (pdf) to move quickly on a bill introduced by Republican Sen. Lamar Alexander of Tennessee and Democrat Sen. Patty Murray of Washington that would continue the CSR payments for two more years.

“Federal law requires insurers to provide discounted cost-sharing for lower income Americans,” the governors wrote. “With the elimination of federal payments for the Cost Sharing Reduction program, insurers are faced with significant financial losses, which could force them to withdraw from the marketplace, or, in some states, request significant rate increases.”

Trump alternately indicated both support and disapproval of Murray-Alexander over the course of three days earlier this month, making its future uncertain. Meanwhile, the administration also has cut the Obamacare enrollment period in half and slashed marketing budgets by 90 percent.

“American [people] fought to defend critical components of ACA, but @POTUS wants to sabotage it from within. Despicable,” Colorado U.S. Rep. Jared Polis tweeted on Wednesday, linking to a Washington Post story reporting those moves could cost more than 1 million Obamacare enrollees.

Polis, a Boulder Democrat who also represents resort areas in Summit and Eagle counties, signed on to a House version of Democratic Colorado Sen. Michael Bennet’s Medicare X bill, which would develop a public option on the Obamacare marketplaces and be rolled out first in places like rural Colorado with only one or two private insurance options.

“It builds on the successes of Medicare by allowing individual and small businesses to choose among existing private insurance plans and a public one,” Polis said of the House version of Medicare X. “In my home district, this is especially important, where options for rural and mountain counties are limited.”

But the various legislative fixes are unlikely to positively impact rates for 2018, so Connect For Health Colorado – the state’s Obamacare marketplace – is urging people to check out all of their options starting Nov. 1.

“We know the current climate has been confusing for many of our customers and stakeholders,” Connect for Health Colorado Chief Executive Kevin Patterson said in a release. “The bottom line is the story is the same. Everyone who buys their own insurance can benefit from taking time to review the health plan options available to them and to check their eligibility for financial help.”

“Those that don’t get tax credits are going to be struggling,” Wright said. “Small group is still less expensive than individual, so we will see more small businesses flocking back to group plans in 2018.”

In Eagle or Summit County, call or email Wright at (970) 328-6300 or bwright@vail.net. Anyone in Colorado in need of an individual plan should go to the ConnectforHealthCO.com website starting Nov. 1 and sign up by Dec. 15 in order to have insurance in place for 2018.