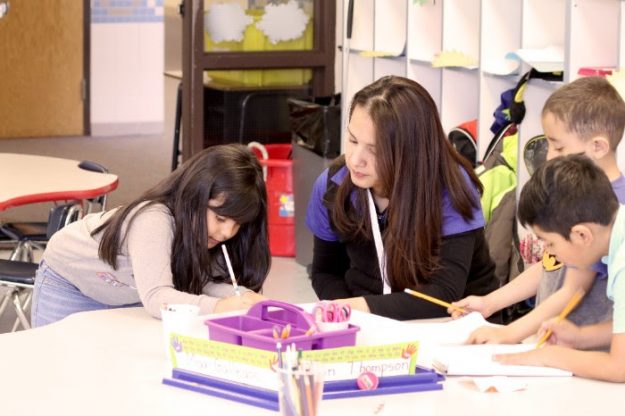 As school budgets were slashed in Eagle County and across Colorado in the wake of the Great Recession, parent volunteerism in public schools transitioned from the right thing to do to an absolute necessity for financially strapped teachers and administrators.

In Eagle County, a resort area dependent both on international tourism and an immigrant labor force, parent volunteerism comes with its own set of multi-cultural, multi-lingual challenges. In Mexico, parent volunteerism in public schools is neither required nor desired, so can be tough to educate Mexican immigrants living and working in the United States on its importance, experts say.

Enter YouthPower365’s Parent Mentor program, which launched for the 2014-15 school year in Eagle County and is now in its third school year of identifying, training, coaching and coordinating a small group of parent mentors who are primarily Spanish-speaking women.

“We are leaders in our homes with our families, and now we are leaders in the schools as parent mentors, and we are growing as well as leaders in our community,” said Gladys Garcia, who’s in her second year as a coordinator for the program and has a child at Gypsum Elementary School and one at Gypsum Creek Middle School.

The initial goals for the local parent mentor program – modeled after a successful program created by the Logan Square Neighborhood Association in Chicago – were to increase the number of minority volunteers in the school system, improve the classroom experience for students and teachers, build a better understanding of how the school system works, and better support their own children’s education.

And with parent mentor volunteers and coordinators working two hours in the classroom four days a week in eight different local schools throughout Eagle County in 2015-16, those initial modest goals were quickly met.

“I know more now about community resources and about the school system and how it works,” said Mayra Orona, who joined the program last year when she saw how her daughter was struggling at Gypsum Elementary School and stayed on when she moved to middle school. “But I can still help her, and I’m continuing in the program, helping with kindergarten even though my daughter has gone on to middle school. I like helping.”

Another parent mentor told how a student whose first language is Spanish struggled with fear and anxiety in the classroom setting, crying during the English-instruction day in a dual-language program until she calmed him, provided a familiar face and language and got him back on track learning English.

“The teachers feel less tension when the parent mentors are around, and they are very happy that we’re coming into the classroom,” Garcia said. “Most of the kids are totally different when they see a parent mentor there to assist them, because they are learning English, and so whenever I encounter parents at the grocery store or outside of school, they are very grateful.”

Schools in Eagle County have student populations that are up to 92 percent minority, with 80 percent qualifying for free and reduced lunch. According to the nonprofit Colorado Children’s Campaign Kids Count database, more than one in five Colorado children (268,000) lived in immigrant families in 2014, and 88 percent of them were citizens.

Besides the Eagle County School District, YouthPower365’s partners on the parent mentor program have included the Literacy Project, which provides literacy training and tutors for the mentors; Vail Valley Settlement project (consultation, training, and mentorship); and the Eagle Valley Library District computer class.

While the volunteers say they’re motivated purely by what the program has done for their children and other students, they have previously received a $500 stipend, internet access and a Chromebook at the end of the semester, and certifying all the volunteers in First Aid and CPR. Other costs include background checks, training, and administrative coordination.

But the most tangible benefits have been for the students struggling to learn a new language and assimilate into a new culture.

“All of a sudden, children from a different language, culture and background have a familiar face, and so students are finding their voice and acceptance in the classroom,” said Kendra Cowles, YouthPower365’s Early Learning Manager. “One school reported that they felt their students are walking through the halls with a sense of pride, acceptance and belonging now that there are adults, leaders and role models who look like them in the schools.”

But an unintended consequence has been a big boost in self-esteem for the parent mentor moms who are learning English, computer skills, how the school system works, while also growing a network of likeminded women advocating in their community for increased volunteerism and involvement in the schools.

“Many of them had reported feelings of depression or lethargy and a lack of motivation and drive,” Cowles said of stay-at-home immigrant mothers. “This group and this opportunity has really given these women a purpose, and so they have created a wonderful network of support.”

That interaction between the volunteer moms and teachers, administrators, Anglo parents and community partners has led to employment, childcare and community leadership opportunities, including a parent mentor serving as president of one local PTA.

“We’re able to expose our dominant culture to that of another culture – our immigrant population and those who speak Spanish – so it’s really helping to support community building in a larger sense too,” Cowles added.

For more information about YouthPower365’s Parent Mentor program go to its website or contact Early Learning Manage Kendra Cowles at (970) 777-2015 or kcowles@vvf.org.