Halfway through the alpine events of the 2014 Sochi Winter Olympics the U.S. Ski Team has been a disappointment with just one medal (Julia Mancuso’s bronze in super combined) through five events.

The men have been shut out after two events (downhill and super combined) but have a chance to make history in Sunday’s super-G, an event no American man has ever won at the Olympics. 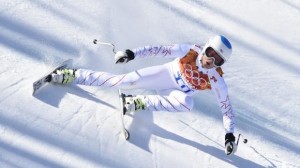 Julia Mancuso so far has earned the only American alpine skiing medal so far at the Sochi Olympics (USSA photo).

Bode Miller and Andrew Weibrecht took silver and bronze in the event at the 2010 Vancouver Winter Olympics — where American alpine skiers claimed a record eight medals — and Ted Ligety heads into Sunday’s race is the defending world champion in super-G.

“It would have been nice to get a medal today, but there are still a lot of events left and there’s still a lot of racing and it’s all totally different events and racing than it was today,” Ligety said after finishing 12th in the super combined on Friday. “I’m still confident in my ability in giant slalom, super-G and slalom.”

Ligety, from Park City, Utah, is the defending world champion in GS and has dominated the discipline the last several seasons on the World Cup circuit. After winning a GS world championship in 2011, Ligety compared his out-of-nowhere gold medal in 06 to being the favorite now in big events.

“The Olympic gold medal in combined and winning a world championship are very different,” Ligety said at the time. “The Olympics are bigger and I was the surprise victor in that event so I didn’t have the pressure on me to perform.

“But being able to perform when you’re supposed to win is far more difficult than just putting it on the line like I did at the Olympics [in 06]. To be able to put down two good runs and win is that much more special.”

Ligety was deeply disappointed after failing to medal on the mushy slopes of Whistler at the Vancouver Games in 2010, and now he’s faced with similarly soft snow in Sochi. Ligety excels in hard, icy, technically demanding conditions.

Squaw Valley’s Mancuso can make some history of her own in the women’s GS on Tuesday. The gold medalist in the event at Torino in 2006, Mancuso failed to medal in GS in Vancouver four years later, but with a podium on Tuesday she would tie Miller for the most career Olympic medals for an American with five.

A win would also tie Mancuso for the most gold medals by an American alpine skier with Andrea Mead-Lawrence, who won the slalom and the GS at the 1952 Oslo Winter Olympics. But Mancuso was having a rough World Cup season before her bronze in the combined on Monday.

“The hardest thing for me to overcome — even though I am feeling good on my skis and got that first medal, which was magical — I lack a little bit of confidence from not having good results in the start of the season,” Mancuso said after finishing eighth in the super-G today.

No American man has ever won two gold medals in alpine skiing, so Miller (gold medalist in super combined in Vancouver) or Ligety could become the first to do so with a win in either Sunday’s super-G or Wednesday’s GS. In December, Ligety and Miller finished 1-2 in a World Cup GS at Beaver Creek.

The absence of transplanted Vailite Lindsey Vonn looms large for the Americans at Sochi. The former Ski & Snowboard Club Vail standout won two medals in Vancouver, including the first ever downhill gold by an American woman. But Vonn is recovering from her second reconstructive knee surgery since crashing at last year’s World Championships.

Another Vail Valley racer, however, could carry the day for the Americans. Eagle-Vail’s Mikaela Shiffrin, the 18-year-old defending world champion in slalom and a seven-time World Cup winner, is the favorite in the event at Sochi on Friday.

Shiffrin also has a shot at a medal in Tuesday’s GS – an event in which she has twice finished on the podium on the World Cup circuit, including a second-place finish earlier this season at Beaver Creek.

American women – Gretchen Fraser (1948 St. Moritz) and Mead-Lawrence (52 Oslo) — won the first two Olympic slalom races ever contested, but no American woman has even medaled in the event since Barbara Cochran won gold at Sapporo, Japan, in 1972.

Over the next five events at Sochi, American alpine skiers would have to pull off a major miracle to equal Vancouver’s record eight U.S. medals (two gold) or even their second highest total of five medals (three gold) at the 1984 Sarajevo Winter Olympics.

The last time the U.S. won fewer than two alpine skiing medals was Picabo Street’s solo super-G gold at Nagano, Japan, in 1998, and the last time both the American men and women were shut out in alpine skiing was at the 1988 Calgary Winter Olympics.

That’s only happened three other times in Olympic history – 36 Garmisch (when combined was the only alpine event), 56 Cortina and 68 Grenoble – and Americans have earned just one alpine medal only two other times — Vail’s Cindy Nelson in 1976 at Innsbruck (downhill bronze) and Phil Mahre (slalom silver) at Lake Placid in 1980.

One Response to At halfway mark, U.S. alpine skiers suffer Sochi disappointment with just one medal