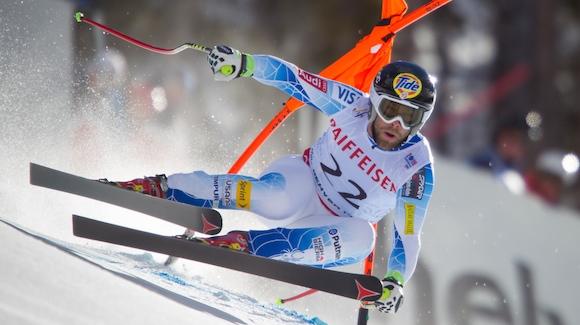 BEAVER CREEK, Colo. — In front of a huge hometown crowd of 20,000 ski-racing fans, the U.S. Ski Team finally picked up another medal at the 2015 Alpine World Ski Championships, as Squaw Valley’s Travis Ganong flew down the Birds of Prey course to claim silver in the men’s downhill.

Ganong boosts the U.S. medal total to two, including Lindsey Vonn’s bronze in super-G earlier in the week. After four races the Americans still haven’t claimed a gold on home snow, but with six events remaining, there are still quite a few opportunities.

It was an intensely sunny day on Saturday, and the stands in Beaver Creek’s Red Tail Finish Stadium filled up by 9 a.m. for an 11 a.m. start. Crowds extended up the side of the race course, reaching above the finish jump, and the cowbells and cheers were deafening as the Americans reached the finish.

The story of the day for the Americans was the 26-year-old Ganong, who took home his first World Championships medal. He skied down in second place and didn’t give up the spot for the rest of the race.

“I’ve trained so hard the last couple of years. I love to ski. All day long, I was just super relaxed and having a good time,” said Ganong, who only has two podiums in World Cups. “It’s unbelievable. Skiing is the most fun thing you can do, and when it works out well in a venue and on a stage like this, it’s so special.”

American Jared Goldberg ran first for the men, and turned in a solid run at his first World Championships appearance, finishing 20th.

The crowd really went wild when Nyman got into the gate. Nyman, who was third in December’s Birds of Prey World Cup, had a spectacular run, taking the lead until Feuz knocked him off with a daring run in which he hit a gate.

“I was hammering. It was so cool. I was tucking in places I’ve never tucked and was just charging down the hill, giving it everything,” Nyman said. “I’m happy with my run. It was really cool to come down to this, in the lead by a couple tenths, people just going nuts.”

Andrew Weibrecht was the last American down the hill, wearing bib 35, and he stunned the crowd by posting the fastest splits at the top. He lost a little time when he got low after Harrier, landing him in ninth place. Still excited, he says he’s looking forward to the alpine combined on Sunday.

“These are guys I ski with every day,” said Weibrecht. “They were a little ahead of me today, so I’ll try to get them tomorrow.”

The men race an alpine combined Sunday — a run of downhill at 10 a.m. and a run of slalom at 2:15 p.m. The downhill will be aired live at noon ET on Universal Sports Network. NBC will air the full alpine combined at 4:30 p.m. ET. The medal ceremony will be in Vail Village at 6:30 p.m., followed by a free concert with Craig Wayne Boyd at 7 p.m.

The races are also free and open to the public. Go to the official website for more information.