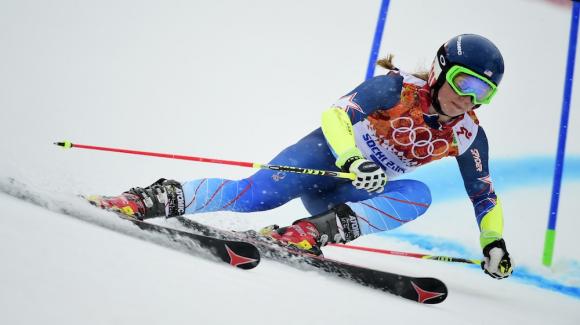 Heavy rain pelted the 18-year-old world champion during her second run, but she turned in a solid run to land in the top five behind gold winner Tina Maze of Slovenia, silver medalist Anna Fenninger of Austria and bronze medalist Viktoria Rebenesburg of Germany.

“I like racing in the rain,” Shiffrin said of the tricky conditions. “I’ve done a bunch of rainy races before, so those were preparation.”

The reigning slalom world champion has never won a GS race, although she’s twice been on the podium in the discipline on the World Cup circuit this season, including a second-place finish at Beaver Creek in December.

“I wanted a gold, but I think this was meant to happen,” Shiffrin said Tuesday. It’s something that I’ll learn from. Next Olympics I go to, I’m sure as heck not getting fifth. I was really thinking that my first GS win would be at the Olympics, and that would be such a cool thing to accomplish. It’s just something that I accept. I got fifth today, and there were four girls who skied better than I did.”

Shiffrin refused to blame the conditions.

“It wasn’t necessarily the worst-case scenario,” she said. “The visibility was better than I thought it was going to be, and the conditions were really good for how much it’s precipitating. I think it was a pretty fair race, and I’m just really in awe of the top three girls. And also the fourth girl, she was ahead of me, too.”

The defending slalom world champion will take on her main event Friday at Rosa Khutor, Russia.

Last week’s combined bronze medalist, Julia Mancuso of Squaw Valley, Calif., skied out in the first run of GS, taking away a DNF, and she won’t race slalom on Friday. The four-time Olympic medalist talked about her future plans.

“Being here and kind of coming back from not a good race season kind of put in perspective for me what skiing’s about,” the 29-year-old Mancuso said. “Coming into these Olympics, I really wanted a medal, and I got bronze.

“I for sure still want gold. If I can continue skiing well, especially on the speed side, and get to a place where I can still be fighting for gold medals … At the beginning of the season, I felt there was no way I’d come back. But after coming here and kind of having that magical day, it makes me want to keep going.”

Mancuso won GS gold at the 2006 Torino Winter Olympics as a 21-year-old and then two silvers at Vancouver in 2010.

The men are set to ski GS on Wednesday, when four-time World Cup champion Ted Ligety of Park City, Utah, will look to win his first Olympic medal for GS and the first ever gold by an American man.