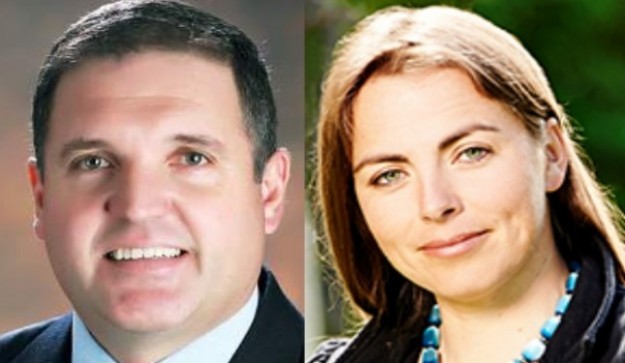 The talk out here in the sagebrush of state Senate District 5 – where Hunter S. Thompson used to blast away at TV sets and Alfred Packer used a pistol to procure his next meal — is not that an increasingly unhinged citizenry is awash in guns.

Both of the major-party candidates for a seat that could determine the balance of power in the state Senate proudly proclaimed their gun ownership to The Colorado Independent and then took potshots at one another over just how “sensible” certain gun laws are.

Donovan, a former Vail Town Council member, counters that her position has been consistent and that Suppes truncated her quote and used it out of context for campaign purposes. She supports universal background checks for all gun sales and transfers, in-person certification for concealed-carry permits and removing guns from homes afflicted with certain forms of domestic violence.

A gun owner herself from a family of hunters and ranchers, Donovan said she would not have supported the 15-round magazine limit had she been in the Senate at the time.

The 2013 gun laws, enacted in the wake of the 2012 Aurora theater and Sandy Hook Elementary School massacres, led to the first-ever recalls of two Democratic state senators and the resignation of a third – putting the party’s control of the Senate in jeopardy with a scant 18 to 17 margin. The debate also is still shaping the governor’s race.

“Nobody in their right mind just automatically knee jerks and then just prays everything is right in the end,” said Suppes, who will work to repeal all four gun laws next session if he’s elected – something Republicans tried but failed to do during the 2014 session.

“Rather than going out and trying to actually fix the problem, we just pass knee-jerk legislation to make everybody feel better and, like in this case, what we do is we’re putting harm to the law-abiding citizen,” Suppes said.

Donovan said the “flip-side to that argument is that allowing violent criminals to have guns is what [Suppes] thinks is sensible, because that’s what can happen if we take away background checks. He’s saying it’s sensible that people can get their concealed-carry permit by taking an online course.

Suppes, in fact, does a little wavering of his own on concealed-carry permits.

“That one is not necessarily a bad law,” he conceded. “We’ve taken the course, my wife and I both. We did the shooting at the range, and it was a good course. It was a very informative course, and I would strongly encourage anyone to do it.”

Still, messing with the law at all was a slippery slope that could lead to ambiguity and possible prosecution by game wardens for something as benign as covering up a sidearm with a slicker when it’s raining, Suppes said. That’s why he would get rid of the 2013 law.

But his first order of business would be taking down a law also passed in 2013 that requires the state’s largest rural electric co-op and the power provider to the majority of the state’s other co-ops to increase their renewable energy portfolios to 20 percent by 2020.

“First and foremost, I’d love to see us get rid of Senate Bill 252, the renewable energy mandate,” Suppes said. “It’s just making things so expensive and I’d love to see that go away.”

Donovan said energy-rich, seven-county District 5, which sprawls from the ski resorts of Vail and Aspen in the east nearly to the Utah border in the west, can accommodate both coal mines and biomass plants.

“Any discussion around energy in SD5 should be about opportunity and not so much about looking backward and trying to undo things,” she said. “You can’t be obstructionist. You’ve got to be productive and pull your district forward. It’s got to be a mixed, multi-faceted approach, and I get very concerned with someone whose main drumbeat is ‘repeal, repeal, repeal.’”

Suppes contends the current Democratic-controlled legislature is out of touch with the concerns of rural Colorado — a situation he says is exacerbated by current SD5 Senator Gail Schwartz, a term-limited Snowmass Village Democrat.

But Suppes too has been accused of being out of touch with modern America for tweeting a link to a racist website in May and commenting that it was an “interesting read.”

“As much as I hate to say it, I never ran that Twitter account,” Suppes said. “I’ve got a business. I’m mayor. I’ve got twin boys. I’m running for a state Senate seat. Forgive me if I didn’t have time to run a Twitter account. One of the people I did have running that account made a post that was wrong. That was remedied.”

Suppes said the unnamed staffer was fired after the incident, but added that the account, which has since been taken down, may have been hacked — something he’s looking into and will refer to the attorney general’s office if it’s true.

Asked if he shared any of the views espoused on the website in question, Suthenboy.com, Suppes said, “Absolutely not. I was appalled by that. It was truly disturbing.”