In denying Hickenlooper’s petition by a 5-2 margin, the Supreme Court said the governor already has an “adequate alternative remedy” and cited Salazar v. Davidson, a case in which then Attorney General Ken Salazar challenged the legality of redistricting law pass by the state legislature. 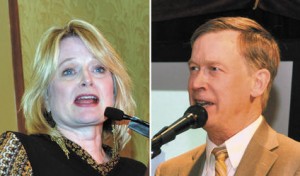 However, the court wasn’t clear what Hickenlooper’s alternative remedy is if he supports the Clean Power Plan, which seeks to reduce carbon emissions by 32 percent of 2005 levels by 2030, if the attorney general opposes and challenges the legality of the EPA rule.

“The Supreme Court left undecided whether the attorney general can ​legally bring federal lawsuits on behalf of Colorado without the governor’s authority,” Hickenlooper spokeswoman Kathy Green said. “The Court did not deny the importance of this issue nor did it uphold the legality of the attorney general’s actions.

“While two justices would have had the Court decide the issue now, the other five justices declined to do so at this point because they believed the governor has ‘an adequate alternative remedy.’ We will give careful consideration to the Supreme Court’s guidance.”

In a prepared statement, Coffman called Hickenlooper’s petition a bid to “undermine the Attorney General’s independent authority to challenge the federal government in court” and once again asserted her “independent constitutional authority.”

“The roles of the governor and attorney general are separate and distinct,” Coffman said. “The two executive officers must work independently to best serve all the citizens of Colorado. I look forward to a successful working relationship with Gov. Hickenlooper while always remembering my duty to Coloradans as their lawyer.”

Twenty-six states are currently challenging the plan, which will require power plants to switch to cleaner fuel sources other than coal or face shutting down, and attorney generals from 15 other states have said they will intervene in support of the plan.

University of Colorado Law School Professor Mark Squillace, who specializes in environmental, natural resources and water law, said there’s nothing in the opinion about what Hickenlooper adequate alternative remedy is.

“I can’t image what it would be short of the governor actually intervening on his own in the case on the side opposite the attorney general, and that would strike me as highly problematic to have the state of Colorado involved on both side of the case,” Squillace said.

“It doesn’t make any sense, and so that’s why I think the court should have heard the review of this case because then at least the court would have to consider the possibility that the state is speaking out of both sides of its mouth on these issues. Either the attorney general represents the governor as the chief executive or she doesn’t.”

If Hickenlooper does intervene in support of the plan using independent counsel, Squillace added he would expect Coffman to then seek to block the governor.

“We are glad to see that the Colorado Supreme Court has opened the door for Gov. Hickenlooper to continue to fight for Colorado’s clean air and public health by opposing unfounded legal attacks by Attorney General Cynthia Coffman on the Clean Power Plan,” Maysmith said. “Coloradans have consistently supported acting on climate change and want to cut carbon pollution. We encourage the governor to pursue all available legal options to protect Colorado’s clean air.”

Compass Colorado put out a statement saying the court clearly ruled against Hickenlooper and in favor of Coffman, calling Green’s statement “spin.”

“Someone needs to tell Gov. Hickenlooper that the court’s denial to hear the case is a strong ‘no,’” said Kelly Maher, executive director of Compass Colorado. “The governor needs to realize that the attorney general is an autonomous statewide elected official onto herself. He doesn’t get to be the boss of everybody.”