Colder weather, snow give snowmaking a boost as more resorts set to open this week

A blast of winter weather helped Colorado ski resorts get back on track with snowmaking efforts Sunday night and Monday, with cooler temperatures expected to linger through Tuesday.

However, last week’s warm weather has kept Loveland Ski Area from opening closer to its traditional mid-October date. Arapahoe Basin remains the only open ski area in the state with very limited terrain available, and Copper Mountain and Keystone are scheduled to open Friday. 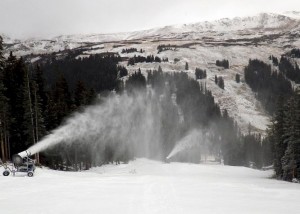 Snowmaking back on track at Loveland.

“After a week of record highs, the cold temperatures have returned to the high country along with a little bit of snow,” Loveland officials reported on the resort’s website on Monday. “The snowmakers got back to work last night and as of 10 a.m., the snow guns were still producing snow on the bottom half of the hill.

“The forecast is calling for cold nights and warm days this week. While that is not ideal, we hope to take advantage of the cold nights and get this season started soon! It is still too early to make an opening day announcement, but we will continue to work around the clock to put the finishing touches on the lower portion of the mountain.”

“Now this is what we have been waiting for,” he wrote on his blog on Monday. “It is snowing and the snowmaking system is cranking. The ambient temperature at Midway is 23 F and falling. Perfect. We expect to make snow all day, all night, and maybe the same again tomorrow.

“Again the priority is to get Ramrod open and to buff out High Noon. Beyond that, we have started making snow above Black Mountain Express and are already working on Lenawee Face and Dercum’s Gulch. This is beautiful and people are excited.”

“The rest of Monday will be cool with lingering clouds for northern Colorado, and then Tuesday through Saturday will be dry and warmer,” Gratz wrote Monday morning. “Our next chance for snow will be on Sunday November 2nd, with another storm possible around the 9th or 10th.”

That’s good news for ski-racing fans welcoming home the U.S. Ski Team from World Cup action over the weekend. Copper Mountain will host the team at its speed center, with training slated to start opening weekend.

As Eagle-Vail’s Mikaela Shiffrin won her 10th career World Cup event in Soelden, Austria, on Saturday (her first ever GS victory), ski-racing officials celebrated the countdown to 100 days until the opening of the Feb. 2-15 FIS Alpine World Ski Championships in Vail/Beaver Creek.

“Throughout the summer I could feel the energy building – everyone’s really psyched,” Shiffrin said in a press release. “I can’t wait to get back in November and again in February for the World Championships. It’s going to be big, and special, and like a mini Olympics. I’m really excited to be a part of it.”