Celebrating the 10th anniversary of both Rocktober and RealVail.com 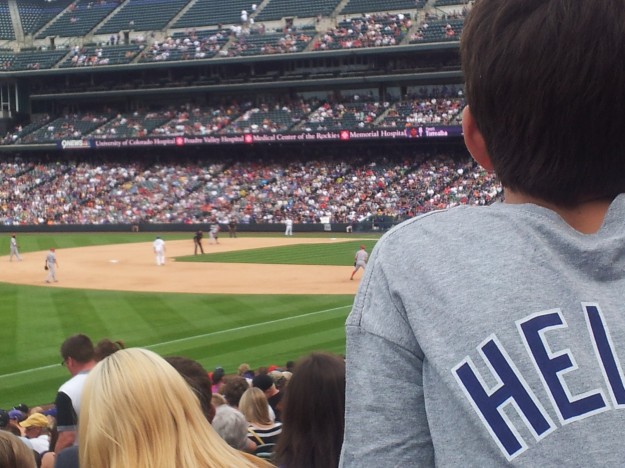 This month marks both the 10th anniversary of RealVail.com and Rocktober, when the Colorado Rockies went on their own Indians-esque tear of 21 wins in 22 games to force a one-game play-in against current Rox manager Bud Black’s San Diego Padres. The Rockies won in 13 innings and went on to the World Series, where they were swept by the clearly chemically-enhanced Boston Roid Sox.

That incredible run will be honored tonight at Coors Field when the Rockies host the Padres with just a two-and-a-half-game lead for the second wildcard spot and a chance to take on the Arizona Diamondbacks in yet another one-game play-in for the right to take on the staggering Los Angeles Dodgers in the divisional round.

I would go tonight if I could but have to be up early Saturday for the Eagle Valley High School home cross-country meet at Gypsum Creek Golf Course, where I will cheer on my two runners for the Battle Mountain Huskies at 10 a.m. and my youngest son in the middle school race at 8:30 a.m. Then it’s the Devil’s Dash 5K open citizen’s race at 9:15, where I’ll be defending my third-place age-group ribbon from last year.

Unlike those 2007 Roid Sox, I will not be juiced. Anyone interested in a great, fun running environment and a “relatively” easy 5K to contrast the Huskies brutal home meet at Beaver Creek should come out and support all the young Vail Valley runners. Click here for more info on the fundraiser Devil’s Dash 5K.

The other 10th anniversary I mentioned is the decade mark for RealVail.com, which I started as a way to control my own publishing destiny while continuing to freelance for other publications (see my bio at the end of this post). The site has steadily gained traction over those 10 years and serves as a valuable progressive voice for the Vail Valley and beyond — in my opinion. My critics would love to see me go away.

That’s not happening. Especially now, with a president in the White House who blames everything on his own bad press instead of owning up to the fact that he’s an incompetent and dangerous blowhard who never should have been elected.

Case in point: Instead of focusing on yet another missile launch over Japan by North Korea, or federal rescue efforts in Florida and Texas, or fixing our broken healthcare system, Trump on Friday actually spent time demanding an apology from ESPN for the opinions tweeted by one of its sports anchors.

The White House Thursday called for ESPN host Jemele Hill to be fired for tweeting that Trump “is a white supremacist who has largely surrounded himself w/ other white supremacists.” Personally, I would like to see Trump fired for inviting Russia to hack our elections and saying there were “some very fine people” among the KKK and neo-Nazi mob that sparked a deadly race riot in Charlottesville — a statement he doubled down on Thursday.

Trump has more than invited the fairly accurate criticism Hill leveled this week, and those who voted for him are complicit in condoning Trump’s nationalist hate speech dating back to his birther movement attacks on President Barack Obama and campaign rhetoric slamming Mexicans as rapists and drug dealers.

Not only should Trump be fired in 2020 (or sooner if it turns out he broke the law colluding with Russia or obstructing the investigation), any corporation that does not stand up to Trump’s hateful and divisive policies and statements deserves to be fired by consumers — and that includes ESPN if it buckles to White House pressure and fires Hill. As big of a sports fans as I am, I will stop watching the network.

Even if they’re the only network carrying the latest Rockies playoff push.