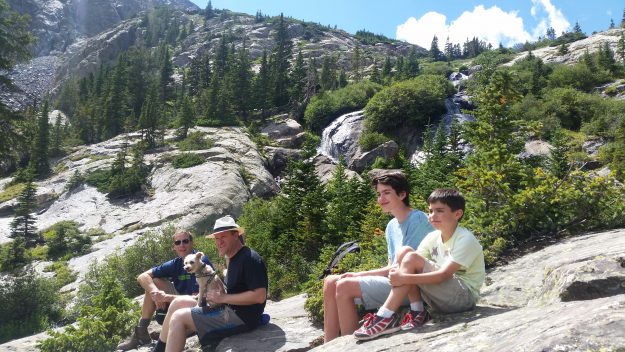 Previously introduced in the House by Polis starting in 2014, the bill has never had a hearing in the Natural Resources Committee, let alone made it out of the House. Now it has a Senate version for the first time and includes the first-ever National Historical Landscape designation for 28,728 acres at Camp Hale.

Bennet was working on a Senate version of the Polis bill in 2016 before President Donald Trump was elected on a Republican Party platform calling for conveyance of federal public lands to state control. With the backing of Utah lawmakers, Trump has moved to downsize national monuments in that state.

Wednesday’s announcement was timed for Thursday’s kickoff of the Outdoor Retailer Snow Show, which moved to Denver this year after many years in Salt Lake City. The Outdoor Industry Association estimates Colorado’s annual revenues from outdoor recreation at $28 billion.

Bennet said Utah’s loss was Colorado’s gain as far as the Outdoor Retailer show goes, and he added the timing is perfect to demonstrate Colorado’s support for federally owned and managed public lands.

“I can’t think of a better case for public lands than the Continental Divide Bill that we’ve just introduced today,” Bennet said.

“I’m not dissing national monuments, but [wilderness] is an attractive level of protection because it’s been through Congress,” Braden said, adding he’s hopeful this bill will someday become law. “Politics will change, things will be better, we all hope, in terms of conservation and Congress, and then if we can get a bill through Congress, that’s a really sustainable conservation win.

“We’ve seen wilderness as a very sustainable thing since the system was created in 1964, and the reason it’s held up is it reflects the will of the people. It’s Congress.”

Polis said he has a “high level of optimism” his bill will one day make it into law.

“I truly believe it’s a question of when not if,” Polis said. “And again, wilderness is forever, and when we look back on this in 50 or 100 years from now it won’t matters so much if it’s done in 2019 or 2021, but it will get done as long as we have dedicated public elected officials like Sen. Bennet and so many others who are helping to get it across the finish line.” 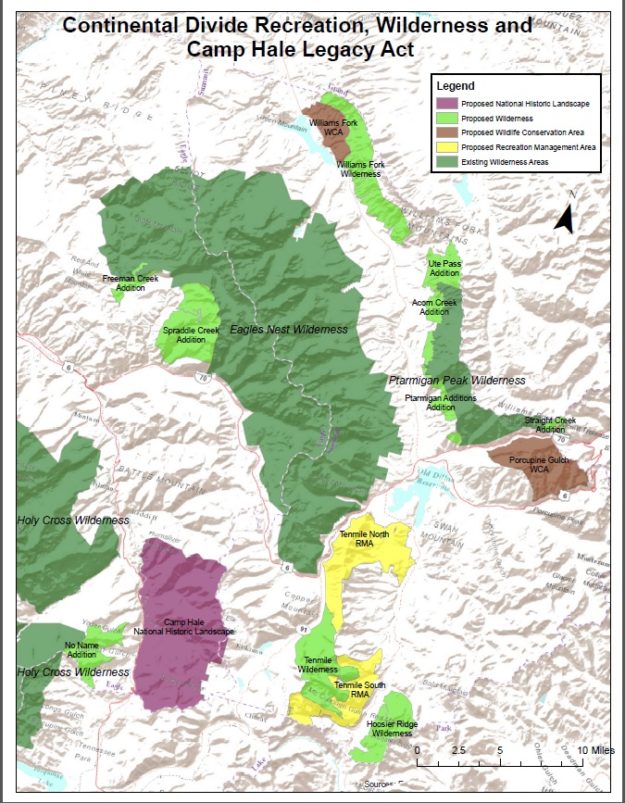 Following are two press releases from proponents of the Continental Divide Wilderness Bill:

“As outdoor recreation leaders from around the country gather in Denver this week, I can think of no better way to affirm Colorado’s commitment to public lands than with the introduction of our bill,” Bennet said. “This legislation reflects the voices of local community leaders, sportsmen, veterans, and others who sat down with us to find common ground for the management and protection of public lands along the Continental Divide. It reminds us not only to protect public land, but also to preserve its history, which is why the National Historic Landscape designation of Camp Hale is so important. Future generations will be able to ski and hike the same terrain as the veterans who created our outdoor industry—who laid the foundation for our state to host the Outdoor Retailer Show just decades later. I look forward to working with Congressman Polis to advance this legislation in Congress.”

“The Continental Divide Recreation, Wilderness, and Camp Hale Legacy Act expands protected public lands in Colorado by designating over 90,000 acres as Wilderness Areas, Recreation Management Areas, and Wildlife Conservation areas,” Polis said. “It means safeguarding fishing, hiking, biking, hunting, horseback riding, and backcountry sports, and it also means protecting the Colorado economy and preserving the Colorado environment for generations to come.  With Sen. Bennet by my side, we can pass the bill, and Colorado can be an example for the nation on how to conserve the epic public land that we all share and cherish.”

The Continental Divide Recreation, Wilderness, and Camp Hale Legacy Act would establish permanent protections for nearly 100,000 acres of wilderness, recreation, and conservation areas in the White River National Forest along Colorado’s Continental Divide. Among other measures, the bill would create three new wilderness areas while expanding three existing ones, protect Colorado’s only migration corridor over Interstate 70, and secure access to outdoor recreation in the Tenmile Range.

The bill also would designate the first-ever National Historic Landscape around Camp Hale to preserve and promote the 10th Mountain Division’s storied legacy. The 10th Mountain Division that trained at Camp Hale led our nation to victory in World War II and then went on to create the outdoor industry, as we know it today. This designation would ensure the historic preservation of Camp Hale, secure existing recreational opportunities, and protect ecological resources with continued cleanup and restoration efforts.

“We applaud this bill for balancing the needs of wildlife and watershed protection with recreational and other uses of the forest, and that our water providers, conservation groups, recreational groups, and businesses have been included in this collaborative legislative process,” said the Eagle County Board of Commissioners. “The addition of the Camp Hale National Historic Landscape will help to preserve and highlight this incredible piece of history and the legacy of the 10th Mountain Division in Eagle County.”

“Summit County supports this effort to protect our public lands, for our citizens and for Colorado’s future success,” said Dan Gibbs, Summit County Commissioner. “Summit County receives millions of visitors every year, and our federally protected public lands, including designated Wilderness areas, contribute significantly to the local economy and quality of life for our visitors and citizens alike. We appreciate that these areas in particular were crafted to manage not only for wildlife habitat and recreation, but also to meet the needs of water providers, fire management, and potential future infrastructure needs.”

“We appreciate this continued support of the citizens and visitors of Grand County through this legislation to allow the National Park Service to continue educational programming at Trail River Ranch, at the gateway to Rocky Mountain National Park,” said Merrit Linke, Grand County Commissioner.

“The Outdoor Retailer show left Utah for Colorado because of how much we value our protected public lands,” said Tom Mullen, a small business owner in Vail. “By preserving Camp Hale and the Continental Divide landscapes, we are offering locals and visitors alike more places to get outside and play.”

For nearly a decade, a diverse and large coalition of local stakeholders has been working to conserve the public lands in the Continental Divide region of central Colorado.  After many community gatherings, meetings with elected officials, and several draft proposals, the Continental Divide Recreation, Wilderness, and Camp Hale Legacy Act reflects the collective interests of many different constituencies ranging from mountain bikers and veterans to small business owners and water users.

Dave Gorsuch, a fourth-generation Coloradan, rancher and businessman said, “Preserving our public lands like the Continental Divide and Camp Hale is about as American as you can get. You leave your politics behind when you walk into a wilderness area, race down a mountain side, or hunt your first elk. I urge Senator Gardner to protect our Western values and way of life and support the Continental Divide Recreation, Wilderness, and Camp Hale Legacy Act.”

The legislation would create a recreation management area that protects world-class mountain biking and other recreation opportunities in the Tenmile Mountains between the towns of Breckenridge and Frisco.

Dave Wiens, the Executive Director of the International Mountain Bicycling Association added, “The Continental Divide Recreation, Wilderness and Camp Hale Legacy Act is a culmination of years of collaborative work with representatives from both the local and national mountain biking community involved in crafting a bike-friendly bill. By working closely with the bill sponsors and proponents, we have succeeded in crafting a bill that really strikes a balance for recreation and conservation in a part of Colorado that really depends on the success of both interests. Colorado’s mountain bikers can be proud of the outcome represented in this piece of legislation.”

The legislation was first introduced by Representative Jared Polis in 2014, but previous versions did not include protections for Camp Hale. Home of the WWII-era training camp of the storied 10th Mountain Division, the Camp Hale National Historic Landscape would preserve a slice of history from the Greatest Generation.  Ski troopers learned the unique skills necessary for winter warfare, and many of the soldiers who trained at Camp Hale returned home and founded Colorado’s outdoor ski industry, including Vail, Aspen and others.

“Designating Camp Hale will pay homage to our veterans and the birth of our state’s booming outdoor industry,” said Bradley Noone, a U.S. Army 10th Mountain Division Veteran. “I want to thank Representative Polis and Senator Bennet for honoring World War II Veterans, small business owners, and the lands that we all enjoy. I hope that Senator Gardner co-sponsors this legislation that will benefit all Coloradans.”

“Colorado’s high country attracts hunters and anglers from around the world who seek its solitude and backcountry. In addition to these public lands and waters which support robust populations of fish and wildlife, this legislation sustains our time-tested traditions of hunting and fishing for current and future generations,” added David Lien, Colorado Chapter Chair of Backcountry Hunters & Anglers.

The Act would provide important protection for key watersheds, helping to safeguard pristine drinking-water supplies for local communities and cities along the Front Range and Western Slope.

The Continental Divide coalition is urging Senator Cory Gardner to co-sponsor the legislation and is hopeful that Congress follows Congressman Polis and Senator Bennet’s lead and passes this bipartisan and sensible legislation.