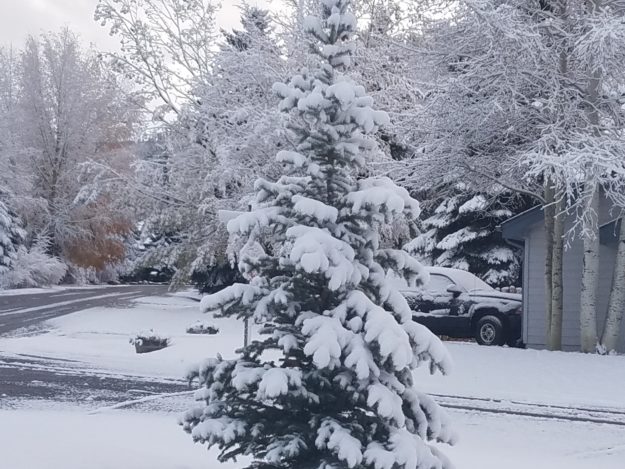 New snow Saturday morning in my front yard in Eagle-Vail.

OK, now I’m getting pumped for ski season. The Vail Valley on Saturday received its third blast of snow so far this fall, with a few inches of fresh all the way down to the valley floor (see photo). That’s great for the two ski areas already open — A-Basin and Loveland — and good for our soon-to-open local mountains.

By soon to open I mean Vail on Friday, Nov. 17, and Beaver Creek on Wednesday, Nov. 22, so about a month away. But snowmaking has commenced at both ski resorts, with crews focused on race training facilities at Vail’s Golden Peak and the famed Birds of Prey downhill course at Beaver Creek.

That last tidbit is courtesy of Tom Boyd at the Vail Valley Foundation, who also sent out a press release on the switch of the annual Birds of Prey men’s World Cup downhill from Friday, Dec. 1 to Saturday, Dec. 2 this year. That’s a great move since it will allow more weekend warriors from Denver to see the best downhillers in the world on North America’s best downhill course (see full press release below).

This is a course where Bode Miller and Daron Rahlves used to take turns winning every season, but they did it on Fridays when fewer folks could play hooky to watch ski racing and then make some turns at Beaver Creek. That benefited me when I was a freelancer for the now defunct Rocky Mountain News in Denver, especially when it published the only Saturday paper as part of its joint operating agreement with the Denver Post. That meant Post ski writer John Meyer had to round things up in the only Sunday paper.

Of course, he had the last laugh, as the Post is still kicking while the JOA pulled the plug on the Rocky in 2009. I think a lot of readers still miss the old Rocky to this day; I know I miss writing for it.

But media, like ski racing, marches on. Don’t hold your breath for a Bode comeback at age 40 (sure would be sweet to see him one last time on the Birds course); instead, the great American hope this December will be 29-year-old Travis Ganong, of Truckee, Calif., who picked up his second World Cup win earlier this year in Garmisch and has done well in the past on the Birds of Prey course, although no wins.

There will be an added buzz this year at the Birds , with Olympic qualification at stake and athletes gearing up for the 2018 Winter Games in Pyeongchang, South Korea — where Eagle-Vail’s own Mikaela Shiffrin will be aiming to defend her Olympic slalom title and Vail’s Lindsey Vonn will be going for one last shot of Olympic glory.

All with the added and always exciting backdrop of North Korean nuclear saber-rattling exacerbated by our own unstable occupant of the White House. Let’s hope the Olympics can once again be a uniting force.

But first, it all gets started for the World Cup alpine racers next weekend in Soelden, Austria, with men’s and women’s giant slalom races, followed by slalom in Levi, Finland in mid-November, then speed events at Lake Lindsey (err, Lake Louise) and then Beaver Creek for the men.

Beaver Creek, Colo., Oct. 19, 2017 — Birds of Prey World Cup race week has always been good to the U.S. Ski Team’s Ted Ligety. The Giant Slalom phenomenon has won six times in the past seven years on the course, making him one of the winningest racers ever at the famed Beaver Creek venue.

“Beaver Creek and the Talon Crew have always done an amazing job preparing the track for us, and it’s been a place where I’ve had a good amount of success, too,” Ligety said. “It’s an arcer’s hill, so you have to be really clean on the edge the entire way down. We spend most of our season skiing in Europe, so being able to ski on home snow again at Birds of Prey in front of family and friends will be huge for us as we kick off this big Olympic year.”

Beaver Creek also has a winning feel to U.S. Ski Team downhiller Steven Nyman. He has collected three Downhill podiums at the Birds of Prey World Cup races since 2006, and he’s a top contender once again on this formidable course.

For Ligety, Nyman, and all the top men’s alpine skiers in the world, a slight changeup is in the works at the 2017 edition of the Birds of Prey World Cup: This year the Vail Valley Foundation, U.S. Ski & Snowboard, Beaver Creek Mountain, and the International Ski Federation announced a new race lineup:

Nyman says it doesn’t matter the day of the week: his plan is to put everything he has into the only men’s speed events hosted on his home soil; pending, of course, how the 35-year old recovers from a left knee injury suffered in Garmisch-Partenkirchen, Germany, January 27.

“Recovery is going well and I plan to be there and at the top of my game all week long,” said Nyman, one of the United States’ best speed-event skiers of all time. “Beaver Creek has been incredibly good to me over the years. I notched my first World Cup podium there, made some of my best results, and made some of my best memories there. I can’t think of a better way to lead into an Olympic year than charging for the podium again in Colorado.”

Six-time overall World Cup champion Marcel HIRSCHER (AUT) is on the bubble: he is currently recovering from a broken left ankle and has ruled out skiing until after November, leaving the door open to possibly compete in the Birds of Prey races.

No matter the field, Americans are bound and determined to continue an historic streak of good results on their home turf.

“Birds of Prey is always a great weekend of racing for our athletes and will be a prime opportunity for fans to see Ted, Steven and the entire team in action prior to the Olympic Games,” said U.S. Ski & Snowboard President and CEO Tiger Shaw. “The men’s team had a very productive summer and is prepared to take on the world’s best in front of a home country crowd. The Talon Crew and Vail Valley Foundation do a fantastic job putting together a memorable event for the athletes and fans in support of alpine ski racing in America.”

The event will also serve as an up-close-and-personal look at the world’s most accomplished alpine skiers as they gear up for the 2018 Olympic Winter Games scheduled for PyeongChang Feb. 9-25.

Taken together with the Saturday downhill, race organizers from the Vail Valley Foundation are expecting an excellent in-person and television audience for the weekend-long event, which will air on NBC and NBC Sports Network Dec. 1-3 (find complete television schedule HERE).

“Fans of ski racing have been incredibly supportive during the 50-plus year history of the sport in Vail and Beaver Creek,” said Mike Imhof, President and CEO of the Vail Valley Foundation, which hosts the Birds of Prey event. “The new lineup is great news for the thousands of fans who come watch the races, as well as the large television audience the sport attracts, especially in an Olympic year.”

For the third year in a row, the Vail Valley Foundation will also host the EverBank America’s Winter Opening festival, which features Birds of Prey Way festivities, live music, athlete signings, a ‘Line of Descent’ Warren Miller film screening, and the Beers of Prey beer tasting – all in Beaver Creek Village. More details on the Festival are available at www.AmericasWinterOpening.com.