Lindsey Vonn was back on skis at Vail on Thanksgiving Day — just nine days after re-injuring her rebuilt right knee – and the U.S. Ski Team was thankful to have its top gun on the road to recovery after a disappointing weekend on Beaver Creek’s new Raptor downhill course.

Vail’s Vonn wasn’t able to make her comeback Friday from a blown knee last February, but plenty of depth on the U.S. women’s speed squad had raised hopes for an American podium on the new course designed and built for the 2015 World Championships. 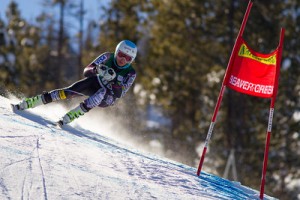 Julia Mancuso in action at Beaver Creek over the weekend (USSA/Cody Downard Photography).

But no U.S. woman cracked the top 15 in Friday’s World Cup downhill and no Americans were in the top 20 in Saturday’s super-G, both won by Switzerland’s Lara Gut. Squaw Valley’s Julia Mancuso, the most decorated female ski racer in U.S. history, was philosophical about her 20th-place finish on Friday.

“It’s another run,” Mancuso said. “It wasn’t my best run, but it’s a beautiful day and it’s another good day of training and a good experience for the World Champs next year. It’s a really fun hill. It’s a great crowd. I’m really psyched to see everyone come out to watch us race.”

But Mancuso was 29th in Saturday’s super-G and failed to finish her second run of giant slalom on Sunday.

“We have a lot of races and I feel like it’s tougher once you reach a certain level in your career,” said Mancuso, 29. “When you have ups and downs you have to remember that it keeps going. When you’ve been around for a long time, it’s hard when you’re struggling to find that extra bit of energy.”

Mammoth Mountain’s Stacey Cook had the top American time in the downhill Friday but finished more than two seconds behind Gut in 19th place. She was 28th in the super-G Saturday.

“Races like this happen,” Cook said. “It’s just unfortunate that it happened on our home turf. It’s a World Cup. It’s a qualifier for the Olympics so it matters, but what we’re really here for is a test event for next year’s World Championships. So it definitely gives me some fire to figure out what went wrong before next year.”

Mancuso, Cook, Leanne Smith and Laurenne Ross all climbed on World Cup downhill podiums (top 3) last season, and Vonn and Alice McKennis of Glenwood Springs – both of whom are recovering from injuries – won downhills. So picking a four-member team for the 2014 Winter Olympics in Sochi, Russia, in February could be interesting.

Vonn, who returned to snow Thursday just nine days after a training crash at Copper Mountain, is now trying to come back in time for next weekend’s World Cup races at Lake Louise, Alberta, Canada, where she’s won 14 times.

“The first day back on snow since my crash and it was awesome,” Vonn said Thursday. “I’m very thankful for many things this year — family, loved ones, great fans — but at this moment I’m happy to be on the mountain doing what I love – skiing.”

The defending Olympic downhill champion admitted earlier in the week on the Today Show that she’s not sure how her re-injured knee will hold up to renewed training. She partially tore the anterior cruciate ligament in the same knee rebuilt after last February’s crash at the World Championships. She also told Today her recent crash would have been worse without a knee brace.

Vonn told reporters in November she still has plenty to accomplish in her sport, including getting four more regular-season World Cup victories to set the all-time mark for wins by a woman.

“When you look back at the record books, there’s many Olympic champions, but to be the No. 1 winningest World Cup racer of all time? You’re just alone on that list,” said Vonn, whose 59 career wins are just three behind Annemarie Moser-Proell’s 62. You’re at the top, and so I think that would be more substantial for me and my legacy and just what I leave behind.”

“Obviously those kinds of things give you a little bit more fire and a little bit more motivation, but for me now I’m not looking at the Olympics as far as records,” Vonn said. “I’m looking at it as a comeback. For me going from the lowest point in my career, the weakest, and basically starting from zero and building my way back up, that is more significant for me than trying to get two medals in Sochi.”