Mark your calendar for Sunday, March 6, and ensure that your après ski plans deliver you to the Shakedown Bar in Vail Village as Denver’s Tracksuit Wedding will perform a special “Friend-Raising” concert from 4-7 p.m.

With a suggested donation of $10, the show will serve as a benefit for Chris Anthony’s Youth Initiative Project and the Colorado Ski & Snowboard Museum’s upcoming expansion and transformation. 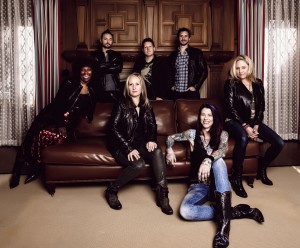 “We’ve wanted to come play a show in Vail,” explained Tracksuit Wedding co-founder Libby Anschutz, “because I spend my weekends up in Vail skiing with my family. Chris Anthony has been a longtime friend of mine and I wanted to do something that would benefit his nonprofit. He suggested that the Colorado Ski & Snowboard Museum would also be a good partner because he works closely with them.”

Tracksuit Wedding is the musical collaboration of Anschutz and Ali Pashel Frankfurt, two grade school friends from Denver. As adults, they reconnected and discovered their mutual passion for rock and roll music.

They have surrounded themselves with a group of highly talented musicians and spent several years focusing on performing iconic hits from the 1970’s and 1980’s. Recognized by the Denver Post as a “Band on the Move”, Tracksuit Wedding has collectively played shows with everyone from Michael Franti to the late BB King.

“We’re 7-8 people in the band, depending on what show we have on,” continued Anschutz. “It’s a lot of very talented people that bring a very high energy performance that’s a lot of fun.”

Following a series of successful summers playing some of Colorado’s biggest venues, the band began composing original songs. Concert-goers on March 6 will have an added bonus of hearing songs from the band’s recently-released and self-titled Tracksuit Wedding CD.

“It’s a six-song EP,” offered Anschutz. “It’s very high energy soulful rock, which best describes us. We’re using the March 6 event as a rehearsal because we’re playing a very large event in Denver, the Beaux Arts Ball, in a couple of weeks at the Convention Center. It’s a 1,200-person fundraiser for National Jewish Hospital.”

The mission of Chris Anthony’s Youth Initiative Project is to improve quality of life through introducing youth to educational enrichment opportunities. A longtime Vail Valley local and professional skier, Anthony developed a classroom program that has been shared with over 20,000 students over the course of the past 16 years.

In 2013, the project obtained its nonprofit status and Anthony has now added two additional components to the program’s mission, including a scholarship program, with financial aid available for beyond the classroom experiential educational opportunities, and building educational tools.

The Museum’s $3 million transformation involves not only expanding the current facility footprint by approximately 675 square feet, but more importantly, to also completely modernize all of the exhibit space, incorporating state-of-the-art multi-media into streamlined exhibits, with prominence given to the 10th Mountain Division presence.

The transformation calls for moving the museum entrance to the west in order to align with the exterior stairway from Vail Village and increasing the square footage by expanding to the south. The timeframe for the renovation calls for construction to begin in mid-August, reopening in mid-December.