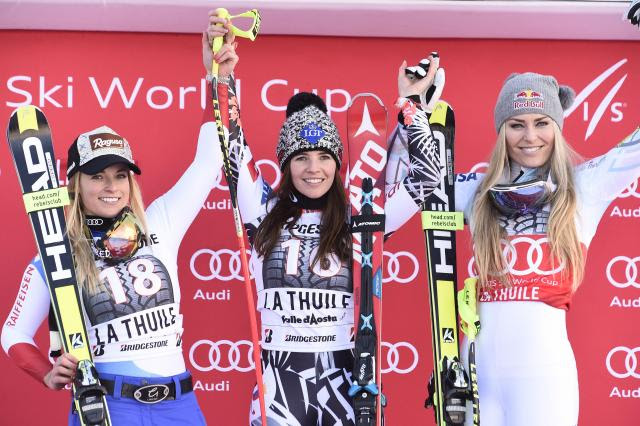 Vail’s Lindsey Vonn held onto her slim overall World Cup lead over Switzerland’s Lara Gut on Sunday, finishing third in a soft and sketchy super-G at La Thuile, Italy behind Gut in second and winner Tina Weirather of Liechtenstein.

Vonn claimed 60 points for third, and Gut got 80 for second. Vonn now leads the chase for her American record fifth overall title 1,200 points to 1,177 for Gut — a mere 23-point margin heading into the final month of racing.

“It’s a really big fight to the end of the season,” Vonn said. “We’re almost at the point where you can feel that the (World Cup) finals are coming … and I like that last part of the season.” World Cup Finals, in which all five disciplines are contested at one event, will be held March 14-20 on Gut’s home snow in St. Moritz, Switzerland.

“I think maybe at the beginning of the season because I was winning so often everyone thought it was real easy, and it’s really not easy,” Vonn said. “The conditions were tough today, soft snow. Yesterday, it was kind of hard for me to get my confidence back after crashing (in Friday’s downhill), but I still was able to fight through and get two podiums, and any time you’re on the podium, you have to be really happy, and I am.”

Vonn was second in Saturday’s downhill at La Thuile after losing a ski and crashing out in Friday’s downhill. On Saturday she wrapped up the season downhill title — the ninth of her career and 20th discipline globe, an all-time record.

“I’m really happy with the weekend. I could have been better. It could have been worse. I came away with my 20th World Cup title, which I’m really proud of,” Vonn said. “Winning is really hard. I tried my best (this weekend) … and I didn’t win. That’s ski racing.”

Up next, the men and women’s World Cup tours converge at a city event in Stockholm, Sweden Tuesday and Wednesday. Vonn and Resi Stiegler, of Jackson, Wyoming both plan on competing.  Slalom specialist Mikaela Shiffrin is not expected to attend after recently coming back from knee surgery.

The Eagle-Vail racer returned to snow just two months after a serious knee injury and won a World Cup slalom in Crans-Montana, Switzerland on Feb. 15.

Shiffrin recently told 120 Sport she’ll return to action next weekend in Andora, which will host World Cup super-G and combined events. The tech specialist is trying to branch out this season in order to compete for the overall title in the future. She claimed her first ever speed-event points in a Lake Louise super-G on Dec. 6 before injuring her knee in training the following weekend.

After Andora, expect to see Shiffrin at slalom and GS races at Jasna, Slovakia, March 5-6, followed by super-combined and super-G races at Lenzerheide, Switzerland, March 12-13 and then the World Cup Finals in St. Moritz March 14-20.