As the World Cup turns: Can Vonn break record; will Shiffrin solve speed? 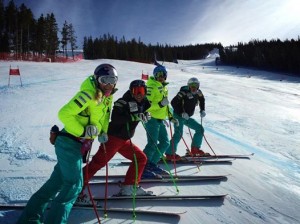 As the World Cup circuit departed North America last weekend and settled in Europe for the next couple of months, there are some big questions facing Vail Valley standouts Lindsey Vonn and Mikaela Shiffrin.

First, can Vonn regain her dominant pre-injury form of late 2012 and early 2013? She showed all the signs in Lake Louise Dec. 6, picking up the American record 60th win of her career by claiming a downhill on a track where she’s now won 15 times. And she was second the next day in super-G.

But how does that form translate to the more challenges courses of Europe, and can she stay healthy enough to break the all-time career victory mark of retired Austrian Annemarie Moser-Proell (62 wins) before returning home for the World Alpine Ski Championships at Vail and Beaver Creek Feb. 2-15?

Second big question: can Shiffrin transfer her dominant slalom technique to the speedier events of giant slalom and super-G and someday challenge for the overall World Cup title?

Slovenia’s Tina Maze won in her third discipline so far this season Dec. 12, claiming a GS in Are, Sweden in which Shiffrin was 10th. Shiffrin finished sixth in a GS in Aspen last month after winning the first of her career to open the season in Soelden, Austria, in October.

Then on Dec. 13 Shiffrin finished off the podium in fourth in a slalom at Are, following a surprise fifth-place finish in the slalom in Aspen – a race in which she led after the first run. Maybe her push to be more competitive in speed events is affecting her slalom?

Shiffrin had raced in two super-G’s at Copper Mountain in order to qualify to debut in super-G at Val d’Isere this coming weekend in hopes of gaining enough points to compete in the event at Worlds on her home mountain in February. But, according to Ski Racing Magazine, she’s now postponing that bid.

It’s shocking to say – only because of the impossibly high standards she’s set – but Shiffrin is “stuck” on one win so far this season after rattling off nine victories her first two seasons, and she has yet to stand on a slalom podium — by far her best discipline.

For perspective, though, Shiffrin has won 10 times on the circuit at age 19. Vonn, 30, didn’t win her first World Cup until she was 20 at Lake Louise in December of 2004. Shiffrin was nine at the time, and she doesn’t turn 20 until March 13.

Vonn spent last week at home in Vail, training on the Birds of Prey course at Beaver Creek and getting ready for the next speed events in Val d’Isere, France, Dec. 20-21. Vonn has won there five times in her career but not since 2010, and that was where she felt her knee give out earlier this year, prompting a second surgery that cost her a shot at the Sochi Winter Olympics.

“Excited to be racing in Val d’Isere in a few days where I won my cow “Olympe” in 2006,” Vonn wrote on Facebook Saturday. “I think this win tracker is very cool and brings back some great memories. Which win is your favorite?”

Heading into the last World Championships, in February of 2013 in Schladming, Austria, Vonn was having another typically dominant season, on track for a fifth overall World Cup title with six wins. Two of those victories were at Cortina and St. Moritz, which are both on this year’s circuit.

In late January that year she won a rare GS at Maribor, Slovenia, just before Worlds. Then she crashed in that fateful super-G at Schladming and completely blew out her right knee. She first had the knee rebuilt by longtime Vail surgeon Dr. William Sterett, but her comeback that year was thwarted when she reinjured the knee in a training crash at Copper Mountain in November. She raced at Lake Louise in early December last year (without and ACL) and finished as high as fifth before feeling the knee give out again at Val d’Isere later in December.

In January, she finally gave up, switched doctors from Sterett to Florida-based Dr. Jim Andrews, and had the knee rebuilt again.

“Today could not have been more perfect … to have come back from two major knee surgeries and get my 60th win today along with my two teammates in the first USA sweep ever, I can’t even begin to describe it,” Vonn said on Facebook Dec. 6 after her first win in nearly two years. “Thank you to everyone who helped get me here. Love you guys.”

Vonn’s comeback coincided with boyfriend Tiger Woods’ attempt to come back from back surgery the same weekend in the Hero World Challenge in Windermere, Fla. Woods finished dead last, although on the day (Dec. 6) Vonn won her downhill, he shot his best round of 69.

Depending on Vonn’s legendary conditioning and her ability to stay healthy, there are a number of speed events she has claimed in the past and could win again to achieve the all-time victory mark.

Vonn needs “just” three more wins to pass Moser-Proell, who won 62 World Cup races, mostly in the 1970s. What does the record mean to her? Nearly everything, she admitted at a press conference in Vail in 2013 during her first comeback attempt:

“If I were able to break the record, it would be extremely significant – probably the most significant thing in my entire career beyond the Olympics [where she won gold in DH in 2010], because when you look back at the record books, there’s many Olympic champions, but to be the No. 1 winningest World Cup racer of all time? You’re just alone on that list. You’re at the top.

“And so I think that would be more substantial for me and my legacy and just what I leave behind. That would be very special.”