Storm early next week could allow Loveland to open

Last week Arapahoe Basin became the first ski area in North American to open for the 2014-15 ski season, and World Cup ski racing action kicks off this weekend in Soelden, Austria, but for the most part it still seems like mountain-bike season in Colorado’s high country.

Still, a cold front is moving in Sunday, and a few more Colorado resorts are inching closer to opening day.

“Another morning of snowmaking on Home Run. Looks like a cold front is moving in Sunday. Our snowmakers should be able to bust a lot of this out next week.,” Loveland Ski Area posted on its website Thursday. 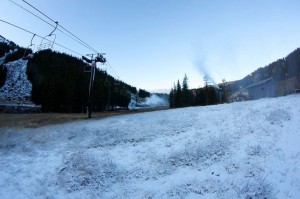 Loveland typically opens about the same time as A-Basin but is obviously still waiting this season. Next up, both Keystone and Copper Mountain are scheduled to open on Halloween, which this year falls on Friday, Oct. 31.

Vail and Beaver Creek don’t even get into the mix for another month or so – at which point colder temps and natural snow will most certainly be swirling around the central Rockies – but anyone looking for a World Cup preview should tune into Universal Sports Network this weekend.

Both the men and the women get under way on the Rettenback Glacier, with a women’s giant slalom on Saturday and a men’s GS on Sunday. Eagle-Vail’s Mikaela Shiffrin hopes to improve on her sixth-place finish there last season, and Park City’s Ted Ligety hopes to defend his GS title.

Shiffrin is much improved in GS, having also claimed a fifth in the event at the Sochi Winter Olympics earlier this year. She’ll also be a heavy favorite to break the U.S. Ski Team’s longstanding drought on home snow at the Aspen Winternational giant slalom on Saturday, Nov. 29, and in the slalom on Sunday, Nov. 30.

The Aspen race will be one of only two opportunities to watch Shiffrin in person in the United States this ski season. The double Olympic and World Championship gold medalist in slalom is gunning for her 10th career World Cup win. She’ll also look to defend her world title at the 2015 FIS Alpine World Ski Championships in Vail and Beaver Creek Feb. 2-15.

Vail is set to open to the public on Friday, Nov. 21, followed by Beaver Creek on Wednesday, Nov. 26. The Soelden races will be shown both on air and at UniversalSports.com starting this weekend (full press release and schedule below). Vail’s Lindsey Vonn, coming off a knee injury, has said she’ll skip early technical races in Soelden and elsewhere and target her return for speed events in Lake Louise, Canada, in early December.

As for recreational skiing, things appear to be on hold for the rest of this week, with a storm moving through the state early next week.

“Thursday through Saturday will be warm and sunny. Our next storm should bring snow to the mountains on Sunday afternoon through Monday afternoon with about 3-6 inches for the northern half of the state.” writes meteorologist Joel Gratz of Opensnow.com.

Universal Sports Network will present extensive multi-platform coverage of the 2014-15 FIS Alpine Ski World Cup both on air and at UniversalSports.com starting with the season’s opener in Soelden, Austria this October 25 and 26. Continuing through March 2015, Universal Sports will showcase more than 65 international alpine competitions and 100 hours of exclusive television coverage, including the World Cup finals from Meribel, France. In addition, UniversalSports.com is scheduled to live stream more than 250 hours of full event competition for authenticated users.

With the FIS Alpine World Ski Championships taking place in the U.S. at Vail-Beaver Creek this February, the U.S. Ski Team faces extra pressure against the world’s best skiers this year. The 2014-15 season will see Austria’s Marcel Hirscher and Anna Fenninger defending their overall World Cup titles against veterans Askel Lund Svindel (SUI), Ted Ligety (USA) and Tina Maze (SLO), in what could be her final season, alongside the next generation of skiers including Norway’s Henrik Kristoffersen and the USA’s rising star Mikaela Shiffrin.

Not to be overlooked is veteran Lindsey Vonn (USA) who is looking to make a much-anticipated comeback following major knee surgery this past January which sidelined her from the Winter Olympics in Sochi, Russia. Vonn has indicated that she hopes to be race-ready by the Lake Louise World Cup speed races December 5-7 which will air LIVE on Universal Sports. Already the most decorated American skier in history, Vonn has 59 World Cup race victories which is just three short of the women’s record held by Austrian legend Annemarie Moser-Pröll.

Presented by Longines, Universal Sports’ broadcast coverage of the 2014-15 FIS Alpine Ski World Cup will feature the veteran play-by-play announcer Steve Porino and analyst Doug Lewis. This year’s broadcasts will also include the newly-designed Audi Race Room where the network’s analysts give viewers an insider’s look at the elite competition by breaking down the techniques and technologies behind individual performances.

“2015 was supposed to be a curtain call for two of the sport’s biggest stars, Bode Miller and Lindsey Vonn, but Miller, Vonn and Julia Mancuso have more in them and are all back,” Porino commented about Team USA. “I predict that we’re also going to watch Mikaela Shiffrin bud from best slalom skier in the world to one of the best skiers, period. And Ted Ligety will continue to cement his legend as one of the greatest giant slalom skiers to have ever lived by adding another World Championship title.”

With regard to the international scene, Porino added, “Fans need to tune in to watch the male version of Shiffrin in 20-year-old Norwegian Henrik Kristoffersen, who is the youngest male Olympic alpine medalist ever. He’s as impressive as three-time overall World Cup winner Marcel Hirscher, who at 25 is the atypical Austrian: slight in stature, big on personality, and he still calls his dad from the starting gate. It’s hard to imagine who will stand in his way this season.”