After an insanely warm March (thank you, global climate change, and you’re welcome, spring-breakers), winter is finally set to return to the Vail Valley later this week. 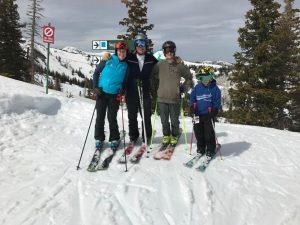 Skiing Deer Valley with Park City in the background.

Forecasters are calling for 4 to 8 inches of new snow by Friday morning, which is good news for any snow riders looking to ride something other than the slush we’ve been carving through for the last several weeks.

And, according to meteorologist Joel Gratz at Opensnow.com, another storm is moving in Saturday night, followed by still more snow early next week:

“Wednesday should be dry, then snow will arrive on Thursday and continue through Friday morning. The best chance to ski soft powder will be on Friday morning, and the deepest accumulations should be in the north-east mountains,” Gratz wrote Wednesday.

“Following dry weather from Friday afternoon through Saturday afternoon, a weaker storm will bring snow on Saturday night and Sunday. More storms should bring snow to Colorado during the last week of March and the first week of April, but the details are still uncertain.”

The good news is we got so much snow in December and January that, despite subpar snowfall in February and March, the snowpack at Vail and Beaver Creek is holding up pretty well.

That’s a good thing since the ski season extends well into April this year because of a late Easter Sunday falling on April 16. Beaver Creek closes that day, and Vail closes a week later on Sunday, April 23.

A nice late blast of winter this week and next should keep most ski terrain open through the end of the season. Great free Spring Back to Vail shows are on tap for Easter weekend, and other fun late-season events include the Vail Film Festival March 30-April 2.

I can also attest to the fact that ski conditions are holding up well at many of Vail’s other Epic Pass resorts, including in California where enormous amounts of snow have fallen this season around Lake Tahoe, and in Park City, where I skied over the weekend.

In fact, Park City was in remarkably good shape considering the mid-60s temperatures we basked in on Saturday, and Deer Valley also is holding up nicely. We skied there on Sunday and really enjoyed getting into some of the steeps and bumps on Empire Peak. Ditto Park City’s Jupiter Bowl. It was a bit sticky down below, but the upper mountains are great.

Now that we’re back in the Vail Valley, it would be awesome to enjoy a few more spring powder days if the snow gods are so inclined.