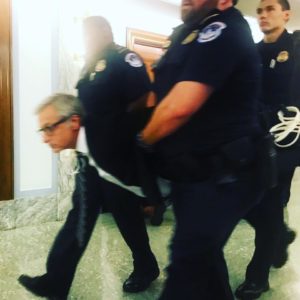 Menconi announced he’ll try to petition his way onto the ballot as a Democrat, using Facebook on Monday to offer this impassioned call for support:

“I’m running because 17 kids were shot on Valentines Day and the Stonenman Douglas students renewed my faith in humanity and my fight. I will not let my kids grow up with assault weapons, global warming, racism and income inequality at the hands of Oligarchs. I want Donald Trump’s sickness out of office and Congress in the hands of Democrats who will Impeach him. I’m done with incrementalism. DONALD NEEDS TO BE IMPEACHED. He will not arm teachers. He will not take us into nuclear war. He will be indicted on money laundering and lying if I’m elected. Our children should not be 17 years of age and trying to fight without adults on their side fighting with them.”

Both Mitsch Bush and Hanlon also previously weighed in on the Parkland, Florida, massacre, but Tipton has remained silent on the ensuing gun-control debate on his social media platforms and official website.

Another Democrat, Grand Junction City Council member Chris Kennedy, pulled out of the race in December for family reasons. He recently endorsed Hanlon, who is seeking to both petition his way onto the ballot and get the nod via the Democratic Party precinct caucus process on March 6 (pdf).

“I am proud to endorse Karl Hanlon as the next Congressman for Colorado’s 3rd Congressional District,” Kennedy said in a recent press release. “It is time for a change in the way we operate in Washington, D.C., and there is no one better to serve our common interests than Karl, and no time more important to our way of life than right now.

“Karl’s background as a park ranger, water lawyer, and rancher gives him the unique ability to understand and solve the full array of issues our district faces,” Kennedy added. “His experience working with legislators at all levels, from city councilors to U.S. Senators, to get things done on the ground will be invaluable in Congress. From his work to bring broadband to Glenwood Springs to his non-profit work assisting veterans with PTSD, Karl’s passion for preserving our communities and growing our economic opportunities will bring the responsive and accountable representation that has been so lacking the last seven years.”

Menconi, now a social activists whose Facebook page features a picture of him being dragged out of a congressional committee meeting by U.S. Capitol Police, took on Democratic Sen. Michael Bennet in 2016, garnering 1.3 percent of the vote. Menconi had first considered running for the 3rd Congressional District before Schwartz got into the race.

To successfully petition their way onto the primary ballot, candidates have to get at least 1,000 signatures from voters registered in the district they’re seeking to represent. Those voters need to have registered a month prior to signing the petition, and can do so by going to the Colorado Secretary of State website. Registered voters can only sign one candidate’s petition.