Shiffrin can’t defend her slalom gold from Sochi, finishing off the podium in Pyeongchang 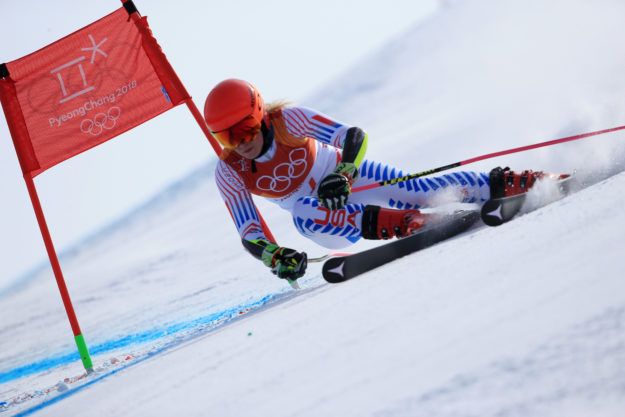 Mikaela Shiffrin won the giant slalom at the 2018 Olympic Winter Games in Pyeongchang-gun, South Korea but came up just short in the slalom on Friday. (Getty Images – Sean M. Haffey)

The wind returned for the second run of women’s slalom at the Pyeongchang Winter Olympics on Friday (Thursday night in the U.S.), and Mikaela Shiffrin’s dream of multiple gold medals at these Games may have been blown away in the process.

Shiffrin had once talked of going for five golds in 2018, but she finished in the worst position at the Olympic Games — fourth in her best event of slalom — and therefore she was unable to defend her gold medal from the 2014 Sochi Winter Olympics.

Sweden’s Frida Hansdotter, 32, who has finished second to Shiffrin so many times on the World Cup circuit, claimed the gold medal with a two-run time of 1 minute, 38.63 seconds.

Coming off her giant slalom gold medal on Thursday, Shiffrin was sick and throwing up right before her first run of slalom earlier on Friday, but she attributed it more to something viral than nerves. Her first run was tentative, with Shiffrin losing time on the top half of the course.

Still, Shiffrin wound up fourth after the first run with a time of 49.37, just .48 seconds back of first-run leader Wendy Holdener of Switzerland. She was still positioned for gold — or at least a medal — in her second run.

That result wasn’t meant to be as Shiffrin fought through an initial wind gust out of the start house and looked to be on track for a medal — only to scrub speed on the bottom flats with a minor mistake about two-thirds of the way down the course.

Holdener wound up with the silver with a two-run time of 1:38.68 seconds, and Katharina Gallhuber of Austria took the bronze in 1:38.95. Shiffrin was just eight-hundreths of a second back with a time of 1:39.03.

NBC analyst Bode Miller said the wind was no more a factor for Shiffrin than it was for the other racers who battled down the rutted course in the final moments of the second run, and Shiffrin herself was not making any excuses after the second run.

“I don’t feel sick right now, I don’t think I have a virus,” Shiffrin told reporters. “I was thinking that after the first run but it might have been a little bit of me trying to make an excuse.” Instead, she blamed a case of nerves and tentative skiing in her signature event, when she is usually very aggressive.

“The only one who can beat myself in slalom is me and I beat myself in the wrong way today,” Shiffrin added. ”I know I have the best slalom turns in the world but I didn’t put it out in the two runs where it mattered.

”Coming here and today and skiing the way that I did, really conservative, was a huge, huge disappointment. It’s hard to explain how that feels but that’s how life goes. It’s a really big bummer but I will learn.”

Shiffrin is skipping Saturday’s super-G (Friday in the U.S.) to rest and conserve energy for Wednesday’s downhill (Tuesday in the U.S.) and Friday’s alpine combined (Thursday in the U.S.). She has won in both disciplines on the World Cup circuit but is nowhere near as dominant as she is in slalom.

In Saturday’s super-G, Vail’s Lindsey Vonn, a bronze medalist in the discipline at the 2010 Vancouver Winter Olympics, will jump into action for the first time in Pyeongchang.

Vonn has been skiing well in the speed events of downhill and super-G coming into the Games, having clearly shaken off the lingering effects of multiple injuries the last couple of seasons. In what will likely be the last Olympics for the 33-year-old downhill gold medalist from Vancouver, Vonn tweeted on Friday that “it’s game time!”

Tomorrow it’s game time! I will give it everything I have with no regrets. This is for my Grandpa! I have bib # 1 and start time is 11am here so 9pm est. Watch it live on @nbc . #allformyGrandpa 🙏🏻❤️ #allornothing