President Donald Trump on Friday took steps to cool off his anti-immigration battle with Mexico but just as quickly enraged practitioners of the world’s second-largest religion by targeting Muslims seeking to enter the United States with “extreme vetting.” 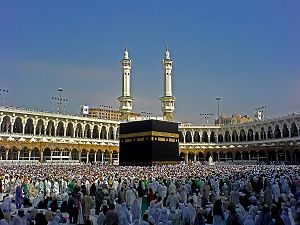 The latest Trump move wrapped up a busy first week of playing to his base by signing a slew of executive orders that must adhere to existing laws and in some cases be approved by Congress.

“President Trump rode a wave of bigotry into the White House and ushered in a new era of hostility against American Muslims. He campaigned as a demagogue and is now governing as a demagogue.,” said Wade Henderson, president and CEO of The Leadership Conference on Civil and Human Rights. “Banning or profiling people of faith is ineffective for our national security; it fans flames of bigotry and makes us all less safe.”

In the ongoing debate over Trump’s directive earlier in the week to kick start completion of a nearly 2,000-mile border wall between the United States and Mexico, Trump on Friday spoke by phone with Mexican President Enrique Peña Nieto after the two canceled a scheduled face-to-face meeting in the wake of Trump’s controversial wall order.

“Trump’s recent actions to build a wall around the country, to strike fear in the heart of immigrants, and now toward banning refugees and religious minorities make his America look more like a police state than the republic we truly are,” Henderson added.

“Turning our backs on some of the most vulnerable populations throughout the world because of their religion is contrary to our values, and will only serve to further divide us as a nation,” Polis said.

“President Trump does not have the mandate for these extreme orders, and I will fight these harmful policies,” added Polis, who represents the Vail area in Congress. “These actions are highly disturbing, and they further underscore the need for both congressional Republicans and Democrats to come together and focus on fixing our broken immigration system in a practical and humane way.”

Trump’s proposal to impose a 20-percent important tax on Mexican goods to pay for his border wall could trigger a trade war with Colorado’s second-largest trading partner after Canada, with retaliatory tariffs that would likely hit Colorado’s agricultural and energy sectors the hardest.

The Vail Valley is also a major tourism and vacation home market for Mexican nationals, and the town of Vail has a sister-city relationship with the Mexican arts community of San Miguel de Allende.

Carlos Slim, at one time the wealthiest man in the world and a Vail homeowner, on Friday called a rare press conference to try to cool off the growing war of words between Trump and Peña Nieto.

“The circumstances in the United States are very favorable for Mexico,” Slim reportedly said, adding that Trump’s efforts to grow the U.S. economy would bring the Mexican economy along with it, thereby benefiting Mexican workers on both sides of the border.

But in Colorado, mayors and members of Congress were still grappling with aspects of Trump’s immigration executive order that would withhold millions of dollars in federal funds from so-called “sanctuary cities” that choose not to use local law enforcement to enforce federal immigration laws. — cities such as Denver, Aurora and Boulder.

“I co-sponsored the Stop Dangerous Sanctuary Cities Act (H.R. 400), a bill that withholds federal funds from jurisdictions where local law enforcement are prohibited from working with federal immigration officials to enforce federal immigration law,” Buck said. “Our immigration laws are meant to protect citizens, and cities should be working with federal law enforcement to ensure the rule of law is upheld.”

But Matt Zone, a Cleveland City Council member and the president of the National League of Cities (NLC) said Trump’s order is overly broad and does little fix the nation’s broken immigration system.

“There appears to be a false assumption that ‘sanctuary cities’ prevent U.S. Immigration and Customs Enforcement (ICE) agents from enforcing immigration laws. This could not be further from the truth. In practice, federal programs intended to partner with cities and towns on immigration enforcement are broken,” Zone said.

“The reality is that in cities across the nation, police departments are routinely cooperating with ICE’s immigration enforcement efforts, while at the same time building constructive relationships with their communities to improve public safety. The order signed by President Trump does not clearly define sanctuary jurisdictions, so it is difficult to foresee how and which cities will be impacted by the order.”