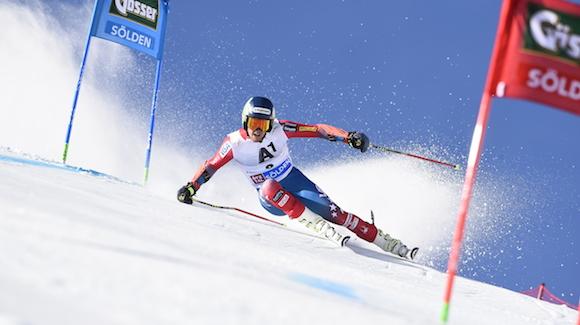 SOELDEN, Austria — In front of a packed crowd, Park City’s Ted Ligety reminded ski racing fans of his giant slalom skills at the opening Audi FIS Ski World Cup race, taking his fourth win in Soelden, Austria. It was a stacked podium, with Thomas Fanara of France and Marcel Hirscher of Austria finishing under two-tenths behind Ligety, in second and third place respectively.

A year ago on the Rettenbach glacier, Hirscher set the tone for his 2014-15 season of collecting small and large crystal globes by claiming a decisive victory in the giant slalom opener as Ted Ligety finished a disappointing 10th. But the tallies refresh anew every year in Soelden, and Ligety is back on top after claiming a nail-biting victory over Fanara and Hirscher.

Mastering the lower flat by carrying speed off the pitch and then gliding through the final gates on the course was something Ligety learned from Swiss great Didier Cuche in 2009.

“That’s the most crucial part of this hill, that bottom flat because you can lose a little bit of time on the pitch as long as you can carry that speed across the flat,” said Ligety. “I learned my lesson the opposite way back in the day with Cuche – I had beat him by seven-tenths on the pitch and he crushed me by eight-tenths on the flat, and so learning from that and knowing that … that’s something I’ve been able to do over the last couple of years.”

With Ligety’s 24th career giant slalom victory, he officially passed Michael von Gruenigen (with whom he was tied heading into the race) on the all-time record board in second place for World Cup wins in the discipline behind Ingemar Stenmark’s 46. The American held a 0.17-second lead over Hirscher heading into an action-packed second run that kept fans on the edge of their seats.

During Ligety’s second run, his 0.33-second advantage over Fanara evaporated as he lost elevation in the middle of the pitch, and he was dead even with the Frenchman two splits from the end of the course. Working his magic on the lower flat, he miraculously made up 0.15 seconds by the time he crossed the finish line.

“It gets dark in the second run and there are some holes and it doesn’t feel good, but you just have to remember to try to keep yourself going down the hill and work for a little bit of speed when you can and try to survive in other places,” said Ligety. “I guess I found the right combination of that today.”

Tim Jitloff (Reno, NV) was the only other American to qualify for the second run. He finished the day in 17th, a career-best result for him at the venue with which he confessed he’s “never had a very good relationship.”

Rounding out the Americans, Tommy Ford (Bend, OR) was 40th, Kieffer Christianson was 48th and Hig Roberts (Steamboat Springs, CO) was 57th in his first World Cup. Nick Cohee (Gardnerville, NV) did not finish.

The guys now shift their focus to the opening slalom race of the season in Levi, Finland, scheduled for Nov. 15.