As Trump calls for police crackdown on immigrants, Denver councilman pushes back 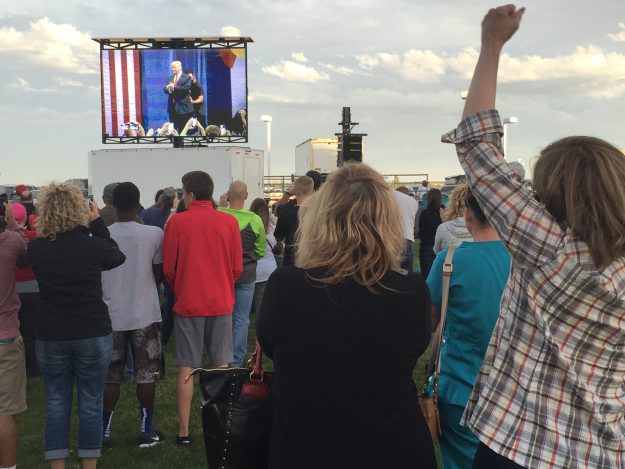 News this week from Donald Trump’s campaign rallies Monday in Loveland and Pueblo, Colorado have centered mostly on the Republican presidential candidate’s defense of the drilling and mining industries and on his response to thorny questions about his tax returns.

That’s not surprising. Energy policy is a major perennial political topic in Colorado, and revelations about Trump’s 1995 tax returns, in which he listed a personal loss of nearly a billion dollars, have dominated the news cycle for days.

But immigration policy is also a major perennial political topic in Colorado, as well as the issue that has defined the Trump campaign from the day he announced his candidacy. And it was the topic Trump built his remarks around Monday, at least at the afternoon rally in Loveland, where proposed border security, deportation and refugee policy threaded through the speech, making up the bulk of prepared talking points and filling out the final rhetorical stretch with tough talk of a return to law and order set against lurid descriptions of murder and drug trafficking and criminal gangs that drew great cheers from the overflow crowd of some 7,500 Coloradans. 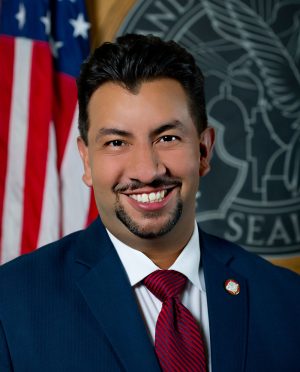 It was a speech in detail and overall affect as certain to thrill his supporters as to alarm his detractors.

“We are going to build a (border) wall,” Trump said, revving up the crowd.

As he has done in past speeches, Trump read the names of murder victims killed in headline-grabbing crimes in which the defendants were undocumented immigrants who, in some cases, had been effectively shielded from local authorities whose jurisdiction over immigrants in so-called “sanctuary cities” is limited by the law.

“To the cartels, to the gangs, to the drug dealers, I have a simple message for you: Your days are numbered and your reign of crime will soon be coming to a very, very crashing end.”

Trump’s visit was buoyed by the announcement that police unions in Denver, Aurora and Colorado Springs had endorsed his candidacy. But the endorsements shook Latino leaders in the state’s capital, which long has experienced clashes between law enforcement and ethnic-minority communities, and where authorities and citizens have recently embarked on hard-won reform efforts.

Denver City Councilman Paul Lopez said he was “extremely disappointed” in and saddened by the endorsement — a reaction he said he shared with many city residents and officials.

“This decision is an endorsement of the entire Trump campaign — a campaign that would criminalize Latinos, that has disrespected men and women in uniform by ridiculing soldiers captured in war… that has mocked women and the disabled,” he said. 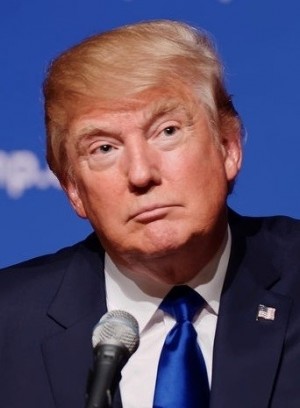 “I’m also shocked that the union would endorse a man who takes pride in not paying taxes. Taxes pay for law enforcement salaries, health care, retirement and protective gear. Here’s a man who proudly refuses to contribute.”

Lopez said the endorsement was a “step backward” in the work to build trust and make Denver a safer and more just city, especially for members of its “most vulnerable communities.”

“I hope officers who disagree with the endorsement speak up,” he said.

Trump on Monday was careful to make a distinction in his speech between Latino U.S. citizens and “illegal immigrants” from Latin America. He also celebrated the “rich Latino history” of Colorado, a nod to the more than 20 percent and rising Latino population in the state, a voting bloc that the Republican Party has struggled to win over in recent years and that overwhelmingly has rejected the Trump candidacy.

Results of a Colorado Keating Research poll conducted during the last days of September and published the day of Trump’s visit had Democratic presidential candidate Hillary Clinton leading Trump in the state by 11 points overall and leading 3 to 1 among Latinos (61 percent Clinton – 20 percent Trump). That’s the largest lead Clinton notched among any demographic group in the state. There were unsurprisingly few Latinos among the crowd in Loveland.

“All Hillary can talk about is racism and attack Trump voters,” Trump said. It was a lead in to comments on security that came tinged with a nativism, or a return to an America for Americans, that he suggested has been diluted in the Obama years and that is lost on Clinton, whom he said favors “open borders” and inadequate screening for would-be refugees and whose record in office has fueled discord.

“We’re a divided nation and each week it seems we’re getting more and more divided, with race riots in our streets on a monthly basis,” said Trump. “This is not the America that was handed down to us, and it’s not the America we want given to our children, but this is the America we will have if we don’t change our leadership immediately…

“Colorado is home to many wonderful hardworking immigrants, and it’s these hardworking immigrants who stand to lose the most from our open borders and our open immigration policy,” Trump said. “Illegal immigration and broken visa programs take jobs directly from Latino workers living lawfully in Colorado and many states — many states — also take jobs from African Americans who want so much to have those jobs. Illegal immigration also brings with it massive crime and massive drugs, including a terrible heroin problem right here in Colorado — you have a tremendous problem, everyone’s telling me about it, but many states have that problem.”

Trump also tied law enforcement and border security to the fight against terrorism.

“Terrorists are infiltrating our country. Now Hillary Clinton wants a 550 percent increase in Syrian refugees and counting… and more refugees from across the Middle East. I want to keep you and your families safe, and we will,” he said. “We’ll build safe zones in Syria, and we’ll get the Gulf states to pay for them, not us. We have to keep our country safe because what’s happening from within, this could be the great Trojan Horse of all time, folks.

“My job is not to represent foreign countries,” he said. “My job is to represent the citizens of the United States of America. Putting your jobs, your wages and your security first… I will ensure we have an immigration system that protects your jobs.”

“Should Trump’s plans to seal the southern border become a reality, I believe this country would be hit hard economically,” she wrote in an email. “It would reduce commerce between Mexico and the United States that benefits both countries. Not only would we lose commerce that comes from south of the border but that would also have a spillover effect. America has been a leader in bringing countries together. With a Trump presidency we risk losing the trust we’ve built with allies around the world.”