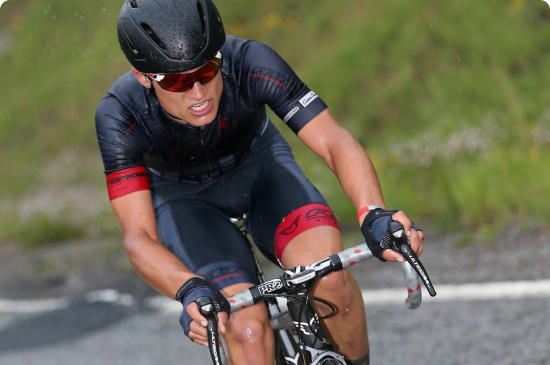 Robin Carpenter (USA) of Hincapie Sportswear Development Team took the stage 2 win into Crested Butte on Tuesday, with Alex Howes (USA) of Team Garmin-Sharp finishing in second place and vaulting into the top of the general classification rankings.

Stage 2 of 2014 USA Pro Challenge brought the riders several challenges including high-altitude climbs, dirt roads and stormy weather, but nothing could stop them as they battled it out to the finish in Mt. Crested Butte.

“This is my home race, so it’s not hard to be motivated for it,” said Howes.

Despite gloomy conditions the race saw huge crowds throughout the stage, with fans lining the route to cheer on their favorite riders.

“One of the most amazing parts of the Pro Challenge, aside from the incredible riding by the cyclists, is the dedication of our fans,” said Shawn Hunter, CEO of the Pro Challenge. “We saw great crowds out there today lining the streets in the rain, which is remarkable. The weather made things tough today, but these world-class riders proved to us exactly why they are the best of the best.”

Stage 2 opened fast by ripping down the Aspen Valley through the sprint cities of Basalt and Carbondale before tackling the 8,700 ft. McClure Pass. A short descent brought the race to Gunnison County Road 12, which is a 20-mile rollercoaster that constantly changes from pavement to dirt and back again, while topping out at 9,900 ft. over Kebler Pass. The race then came to an end with a sprint through downtown Crested Butte and the steep finish climb up to Mt. Crested Butte.

As the riders set off on a three-mile neutral section out of Aspen, they knew what was lying ahead – a long challenging stage with three sprint and KOM competitions. As the riders left Aspen and descended into the town of Basalt traveling at speeds of 45 mph, Matej Mohoric (CAN) of Cannondale Pro Cycling broke away from the group, but was reeled back in just before the sprint. Seventeen miles into the stage they hit the first Lexus Sprint Line where Tyler Magner (USA) of Hincapie Sportswear Development Team took max points, followed by the man in the yellow jersey Kiel Reijnen (USA) of UnitedHealthcare Pro Cycling Team and Mohoric.

With the next sprint not far down the road in Carbondale, the pace stayed high and Magner crossed the line first, followed by Reijnen and Jure Kocjan (SLO) of Team SmartStop. Next, the riders would cross into the feed zone to prepare for the Sierra Nevada KOMs of the day. Leading into the first KOM competition at McClure Summit, a Cat. 1, 3.5-mile climb with an average grade of seven percent, things started to heat up with attacks coming off the front.

With the summit of McClure Pass in his sights de la Cruz attacked and hit the top first, followed closely by Jacques-Maynes and Torckler. The next challenge facing the riders would be a 20-mile dirt road section, which would continue as they went up over Kebler Pass (Cat. 2). Heading into that section the field was split into two separate chase groups.

With inclement weather and the challenging course facing the riders, the gap started to come down as they approached Kebler Pass. An attack was launched, but most of the riders were able to follow, leaving only Crawford, Jones and Carlsen chasing behind. Soon after though, de la Cruz, Lewis and Smith also were dropped. Carpenter seized his opportunity and attacked the break on the climb to reach the summit first. Once the chase group reached the top, Matt Cooke (USA) of Jamis-Hagens Berman crossed the line next, followed by Michael Schär (SUI) of BMC Racing Team.

As weather worsened on Kebler Pass, with hail and lightning strikes being reported within 100 feet of the route, the decision was made by race officials to neutralize the race for the safety of the riders. At 9k to go, the race was stopped and restarted, reinstating the 45-second gap Carpenter had on the chase. The decision was made by race commissaires, whose No. 1 priority is the riders’ safety, based on the situation and the available information at the time.

With the race back underway, Carpenter worked hard to maintain his gap over the field and took max points at the Lexus Sprint Line in Crested Butte. Crossing the line second would be yesterday’s most aggressive rider Danny Summerhill (USA) of UnitedHealthcare Pro Cycling Team and then Schär.

With 1K to go and the steep climb up to the finish in Mt. Crested Butte ahead of him, Carpenter gave it his all up the final KOM of the day. With yesterday’s second place finisher Howes and defending Pro Challenge champion Tejay van Garderen (USA) of BMC Racing Team coming up quickly behind him, Carpenter was able to hold on to take the stage win. Wet, but enthusiastic fans lined the road to see his victory and to cheer Howes and van Garderen in to second and third place, respectively.

“I attacked my breakaway companions about 10K away from the climb,” said Carpenter. “I couldn’t see anyone. The last time check I saw was 30 seconds to the peloton. I had it in my head that if I could get over the top of Kebler Pass with enough time, I could end up getting to Crested Butte with 30-40 seconds. This win is huge for us and for me personally it’s massive – the best ride I’ve had in my short career so far.”

During Stage 3 of the 2014 race, riders will not only have to contend with a mountaintop finish, they also will have to pass over it first, giving spectators a chance to see the race multiple times from the same vantage point. Stage 3 starts in Gunnison and heads east for 35 miles before tackling the 11,300 ft. monster that is Monarch Pass. The riders will then descend the eastern slope of the pass and do two 9-mile loops through Salida and the surrounding countryside. Then it’s game time as they tackle nearly 20 miles of climbing to a finish at 10,800 ft.-Monarch Mountain Ski Area.

Fans can view the race on the daily NBC Sports Group broadcasts. The Stage 3 schedule is as follows:

For full results, course information and more, go to www.USAProChallenge.com.