Burton US Open Snowboarding Championships return to Vail on Feb. 27 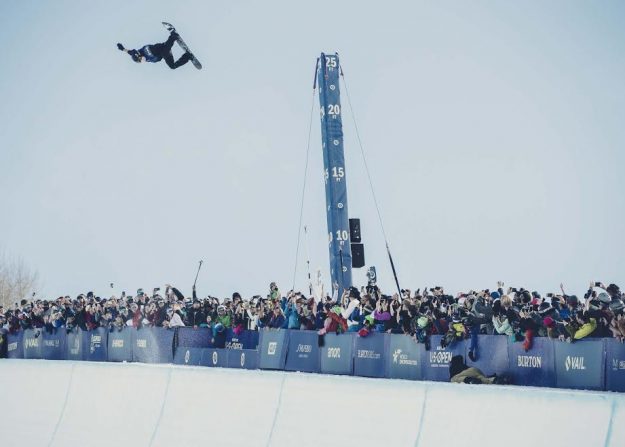 Burton Snowboards on Tuesday announced the return of the 35th annual US Open Snowboarding Championships to Vail Mountain Feb. 27 – March 4. Now in its landmark 35th year, the Burton US Open continues to be the longest running and most prestigious event of the competitive snowboarding season.

The Burton US Open offers the world’s top riders the chance to take home a major title and add their name to the enviable roster of past winners, with spectators invited to take in all the action and excitement for free.

In addition to top-tier snowboarding talent, this year’s event features an enhanced entertainment roster packed full of live bands and DJs to be announced in February. The Burton US Open continues to be a hub for fun free events, demos, and activities for the entire family throughout the event.

Expect plenty of snowboarding action throughout all five days of competition kicking off on Tuesday, Feb. 28 with the celebrated Burton US Open Junior Jam featuring top halfpipe groms from around the world battling it out for the $2,000 prize purse and a spot alongside the pros in the halfpipe semi-finals later in the week.

For 2017, the competitive field has been expanded to include 16 boys and eight girls aged 14 and under. Don’t miss this peek into the future of the sport—2016 featured a mind-blowing performance by young Judd Henkes, who managed to finish fifth overall in the Burton US Open halfpipe finals after coming up through the Junior Jam. What young star will wow the crowds in 2017?

The pro competition gets under way starting Wednesday, March 1, with the world’s top riders competing in the slopestyle and halfpipe semi-finals for a chance at the main event and the $343,000 prize purse.

With the season well under way, riders are ready to put down their most progressive runs and become part of history at the legendary Burton US Open. Last year saw the return of Shaun White (USA) winning the halfpipe event with a commanding seven-point lead, blasting a crowd-thrilling massive 25-foot backside air—possibly the biggest air ever seen in competitive halfpipe riding.

2017 marks the fifth year in a row that the Burton US Open will be held at Vail Mountain where fans and families are invited to get in on all of the action on-hill and off. Burton will once again provide free snowboard and binding demos for riders to try out all of the newest 2017 equipment.

Burton Girls will also be offering demos and a free Burton Girls Ride Day for the ladies. Kids ages 3-6 years will be able to session the Riglet Park, a custom kid’s learn-to-ride area, plus try out free Burton demo equipment and lessons.

The excitement of the Burton US Open continues in the Town of Vail with an expanded free live concert schedule over four days featuring some of this year’s biggest main-stage touring bands as well as breakthrough musical acts and renowned DJs.

Join in the fun at participating bars and restaurants throughout Vail Village offering Après All Day food and drinks specials, live broadcasts of the slopestyle and halfpipe events, plus giveaways and contests.

Additional activities include the return of the US Open Broomball tournament; product sampling, demos and giveaways in the Sponsor village at Golden Peak; exclusive US Open gear at the Burton Pop Up Shop at the base of the slopestyle course, plus opportunities to meet the pros and more.

New this year, download the Burton US Open App for all information around the 2017 Burton US Open, including the competition, event and programming schedule, competing athletes, live bands, results and more.

The app will be available through Google Play and the App Store starting mid-February. Also follow #BurtonUSOpen and catch all the action online via the live broadcasts at BurtonUSOpen.com and Red Bull TV with additional TV broadcasts of slopestyle and halfpipe finals airing nationally on FS2 and locally in Colorado on TV8.