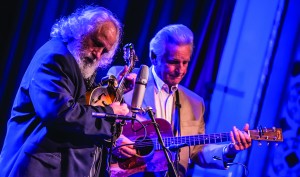 The musical duo has made a bluegrass friendship that spans nearly fifty years and they continue to enthrall audiences, igniting tunes that have influenced countless musicians for nearly a century. Tickets are $58 and are on sale now at the VPAC Box Office (970.845.8497/ www.vilarpac.org). The VPAC is located under the ice rink in Beaver Creek Village (68 Avondale Lane, Beaver Creek, Colorado).

Del McCoury and David Grisman met at the first show Del ever played (on banjo) with Bill Monroe in the spring of 1963 at New York University in Greenwich Village. Three years later, Del & Dawg played their first gig together in Troy, NY at the Rensselaer Polytechnic Institute. They both celebrated the arrival of first-born sons, Monroe Grisman and Ronnie McCoury, within a month of each other.

Through the years they have shared the stage at venues and festivals across the country and in 2012 released Hardcore Bluegrass, a unique collection of bluegrass classics, made at two Dawg studio jam sessions in the 1990s.

For fifty years, Del McCoury’s music has defined authenticity for hard-core bluegrass fans as well as a growing number of fans only vaguely familiar with the genre. “To keep the purity that you need to do this kind of music, and the drive and the energy takes a special kind of guy,” said fan Elvis Costello. Already the recipient of nine IBMA Entertainer of the Year awards, a Grammy in 2006 and the prestigious National Heritage Award in 2010, Del McCoury is being inducted into the International Bluegrass Hall Of Fame this fall.

An acoustic pioneer and innovator, David Grisman forged a unique personal artistic path, skillfully combining elements of the great American music/art forms of jazz and bluegrass with many international flavors and sensibilities to create his own distinctive idiom of “Dawg” music (the nickname given him by Jerry Garcia.) In doing so, he inspired new generations of acoustic string musicians, while creating his own niche in contemporary music.

In 1963 Grisman made his first recordings both as an artist (Even Dozen Jug Band – Elektra) and producer (Red Allen, Frank Wakefield and the Kentuckians ‚ Folkways.) In 1966 Red Allen offered David his first job with an authentic bluegrass band, the Kentuckians. Grisman began composing original tunes and playing with other urban bluegrass contemporaries like Peter Rowan and Jerry Garcia, with whom he would later form Old & in the Way.